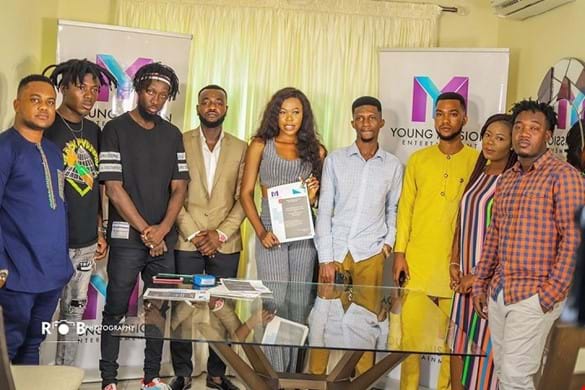 The AVO and Young Mission Entertainment team with Freda Rhymz


MONTHS after leaving Black Avenue Musik, rapper Freda Rhymz has signed a five-year deal with another label, Young Mission Entertainment and Africa’s Very Own (AVO).
The deal was revealed at a press briefing at Emerald Court, Airport, Accra on Tuesday, August 6. Per the contract, Freda Rhymz is expected to release hit songs, shoot a number of videos, perform at events outside the shores of Ghana and also release an album.

AVO will handle the day-to-day activities of the rapper in terms of brand growth while Young Mission Entertainment will be in charge of ensuring their operations run smoothly.

Speaking on why they chose to sign Freda Rhymz, CEO of Young Mission Entertainment, Ebenezer Frimpong Amoako said their research had indicated that she had star quality.

“We had our men underground who did a lot of digging and we found out that Freda is hardworking, dedicated and had the kind of flair we wanted in an artiste. Freda is not the first artiste to be signed on the label, we have one other female called Lina who is in Paris but in Ghana she is the first.

“We believe that she has a lot to offer when it comes to music and the truth is that she is worth signing on. We already have some songs that we feel are already hits, there are about four of them that will be released before the year ends,” he said.

“The company is poised to project Ghanaian mMusic and musicians of Ghanaian descent across Europe. In our past dealings, we have been able to take on bookings and tours for notable Ghanaian artistes and various organisations without any issues like Obrafour, Kofi Kinaata, Bisa Kdei, Patapaa, and a host of others,” he said.

A member of AVO, Allen Kofi Anti said they are poised to make Freda Rhymz the star that she is.

“We have made it happen before, we did same for the late Ebony Reigns so we are ready to do same and even more for Freda to get to the top. Before we came out to finally let the world see her as part of us, we already had our songs, strategies in place to make that impact.

“The truth is that, as a team, we have always wanted to work with her but we were waiting for the right time and so when we got a call from Young Mission about their intentions, we just took the opportunity and today we are here. The world should be ready for us,” he said.

For her part, Freda Rhymz expressed her excitement about the deal. “I am really excited about it, after I won MTN Hitmaker, a lot happened and it gave me the mileage that I needed but this deal is the seal to everything, people are going to see me in a light that they have never seen before,” she promised.

Apart from Freda Rhymz, sound engineer Danny Beatz and MC Ogee, were also unveiled as signees and they promised to do their best to make the label successful.