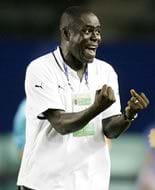 Ghana’s Black Satellites coach, Sellas Tetteh remains flattered by his side’s impressive start to the next African Youth Championship qualifiers but insists the battle has just begun. Ghana squeezed five goals past Angola in their first qualifier played at the Ohene Djan Stadium in Accra to give their campaign a major boost and meaning but coach Tetteh believes their opponents could be tricky at home. Mario Queta had gifted Angola the lead in the 12th minute before Ghana staged a come back to ensure a solid win in the game the Southern Africans proved to be worthy opponents. Coach Tetteh told GNA Sports ‘it is a very comfortable win for us today but Angola can be very tricky at home. “They played very well except that we were better on the day and got the goals. “We will have to be very watchful for the return game because I envisage they will be tougher at home.” Ghana is seeking qualification to the competition she missed twice in succession and the coach is convinced his charges could succeed where their two predecessors failed. “This team is determined to qualify for the competition. Coach Tetteh said understands that qualification would not come on a silver platter and therefore do well to psyche up the boys to carry high the flag of Ghana in the second leg. “We are aware of the task ahead and will work hard to ensure we qualify in the end.” The Satellites would need at least a point from the return leg before they clear two more hurdles to book a place in the tourney billed for Rwanda in December. Tetteh’s star-studded team would however have to work extra hard in search of regular places in the squad. With such tested players like Ishmael Yartey and Daniel Opare all reduced to substitute in the game, the coach warned and insisted that “selection will solely be done purely on performance and not by names.”