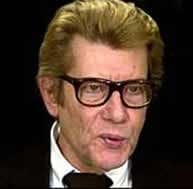 Yves Saint Laurent, considered by many as the greatest fashion designer of the 20th Century, has died in Paris at the age of 71. Saint Laurent changed the face of the fashion industry when he became chief designer of the House of Dior at 21. He designed clothes that reflected women's changing role in society: more confident personally, sexually and in the work-place. He retired from haute couture in 2002 and had been ill for some time. Saint Laurent died on Sunday evening in the French capital, the Pierre-Berge-Saint Laurent Foundation announced. Pierre Berge, the designer's former business and personal partner, said he had died at his home after a long illness. He did not give details. French President Nicolas Sarkozy paid tribute to Saint Laurent's "creative genius". 'I draw on woman' "I found my style through women," Saint Laurent once said. He was a libertarian, an anarchist and he threw bombs at the legs of "That's where its strength and vitality comes from because I draw on the body of a woman." He changed forever what women wear, introducing trouser suits, safari jackets and sweaters, BBC arts correspondent Razia Iqbal says. Saint Laurent was a great innovator, helping to revitalise haute couture while making ready-to-wear design popular. The editor of British Vogue, Alexandra Shulman, said he had helped democratise fashion: "Before that people had small salons for rich people. "Saint Laurent brought it to the people. "He was young and groovy. Pop stars were hanging out with him and younger generations related to him." 'Devastating' news President Sarkozy said the designer had been "the first to elevate haute couture to the rank of art and that gave him global influence". "Yves Saint Laurent infused his label with his creative genius, elegant and refined personality... because he was convinced that beauty was a necessary luxury for all men and all women," he added. Speaking on French radio, Pierre Berge said his former partner had empowered women. "In this sense he was a libertarian, an anarchist and he threw bombs at the legs of society," he said. "That's how he transformed society and that's how he transformed women." Famous French embroiderer Francois Lesage, who worked 40 years with the designer, said he was "devastated" by news of his death. "I have never known a designer who would give so much thought to something when it was proposed to him," he told French TV. "It is a great grief for me." Life of ill-health Born in the Algerian city of Oran at a time when the North African country was a French colony, he had a precocious talent. His first collection caused a sensation with its gently flared dresses and jackets that set the mould for 1950s fashion. Within three years, Dior had died and Yves St Laurent had taken his place. He took the world by storm with his trouser suits, highly coloured ethnic prints and designs inspired by the art world. Taunted as a schoolboy because of his homosexuality, Yves St Laurent suffered mental and physical ill health for much of his life and he appeared in public only rarely.