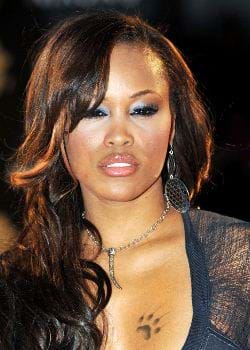 Rapper and actress Eve is single again after splitting from her Ghanaian boyfriend. The "Let Me Blow Your Mind" star embarked on a relationship with the African businessman earlier this year after ending her romance with Teodorin Nguema Obiang, the son of the president of Equatorial Guinea. Eve spent her spare time flying between her native U.S. and Ghana to see her lover, but she admits the long distance and their different outlooks on life took its toll and she recently broke off the relationship. She tells Sister 2 Sister magazine, "I was going to Ghana for a while just because that's where he is from. He's an amazing man. We keep in touch every so often. He was a great guy, but I knew it wasn't right. We definitely didn't have the same things going on in our heads, as far as what it is we wanted as a life. He pretty much was down to do whatever I wanted to do and I don't need that, you know?" The star, who was previously engaged to marry rap producer Stevie J., confesses she's eager to settle down and get married, but she is determined to find Mr. Right first. She adds, "I need somebody in my life that's going to challenge me. Like, I definitely want to be priority, but I don't want a sap." In February, Obiang was revealed to be under investigation by U.S. federal agents, accused of laundering hundreds of millions of dollars into America using businesses he set up in the name of his friends, including the rap star.