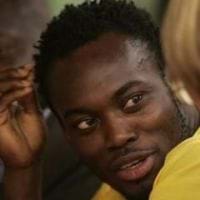 Michael Essien would miss the chance to earn his 40th cap for Ghana after been exempted from the Black Stars’ friendly against Australia later this month. The midfielder has a big engagement two days - May 21 - before the Ghana's game in Sydney because he will play for Chelsea when they face Manchester United in the Champions League final in Moscow. A win for Chelsea in the final means, the Ghanaian must also participate in the club's post match procession in London, a day after the match. However, Essien, would be on hand to play in the crucial opening World Cup qualifier against Libya, one week after the Australia friendly and playing in the Champions League final. Vice President of the Ghana Football Association, Fred Pappoe says it would be unreasonable to expect the player to feature in all the games leading to the crucial World Cup qualifier. “We have long anticipated this issue so we made contingency plans to give Essien the opportunity to fully concentrate on the Champions League final,” GFA vice president Fred Pappoe said. “It would be unreasonable for us to expect him to play in Moscow and travel on a very long journey to Sydney. “We want Essien to be fully fit when the World Cup qualifiers start so we have left him out and this can also offer the opportunity to another player to show the coach what he can do.” Ghana plays Australia in a friendly game on May 23.