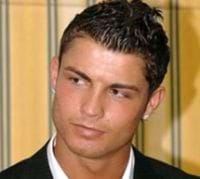 Paris Hilton was snubbed by a soccer star in a Hollywood club on Tuesday night. The hotel heiress - who is currently dating Good Charlotte rocker Benji Madden - attempted to party with Manchester United player Cristiano Ronaldo at exclusive nightspot Villa - but he wasn't interested. A source said: "Paris was all over him. The moment he arrived, she went over to his private table. At one point, she pushed her chest together and made a point of trying to snuggle up against him. "But Ronaldo clearly wasn't interested in Paris. He turned his back on her." Paris, who was wearing a short peach dress, wasn't the only female reveller who failed to impress the 23-year-old millionaire sportsman. The source added to website MailOnline: "Every girl in the club was checking him out but Paris couldn't take her eyes off him. You could tell he enjoyed the attention but he didn't really want anything to do with any of the girls. "He just sipped vodka soda in the corner of the club with his friends." Ronaldo, who hobbled into the club on crutches nursing an ankle injury, is believed to be single following his split from his model girlfriend Nereida Gallardo last week. The Portuguese athlete was accompanied by a group of male friends and arrived at Villa following a business dinner at Hollywood steak restaurant STK.