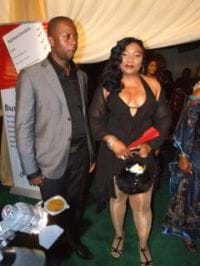 After months of crying and granting ceaseless interviews that her husband,Charles Ekwu, abandoned her and Raymond,their baby, controversial Nollywood star actress appeared to have found a new man that would satisfy her emotional and sexual needs.According to NFC, the lover man is an unknown face who goes by the name Gerald. Eucharia and her much younger lover flew the Chanchagi Airline designated as Soul flight 1 to the NMA 2008 in Owerri,Imo State on Friday 23 May 2008.They had great fun as they held hands and whispered sweet nothings into each other’s ears.They were like siamese twins or teenagers,experiencing love for the first time. Some of Eucharia’s friends were surprised that the actress popularly known as Sharon Stone of Nigeria because of her daring roles in movies. Some people even thought the young man was he younger brother until they were checked into the same hotel at Imo State. Incidentally, the actress is also from the state. The young man is already adjusting to his new found 'celebrity' status courtesy of her romance with UK as Eucharia is populrly called by friends. She drove in the same Limousine with the actress and was the cynosure of all eyes at the various events organised for the NMA hosted by Governor Ikedi Ohakim of Imo State. In a chat with NFC after the breakfast for guests and celebrities on Saturday 24 May 2008,Eucharia confirm that she is happy with her younger lover. Eucharia told NFC that she is very happy with her new relationship. "There is nothing like having a man who can make you feel so good" she said. "I have all that in him" she added. She also confirmed that the name of her man is Gerald. on the side, Eucharia said she is very happy that the state government is using entertainment as a means of bring people together for the sake of unity. She is very proud that such a thing is happening in her own state. What we couldnt confirm is whether or not, Eucharia used the opportunity of the NMA to show off her man to her kinsmen in her home town. Eucharia is following the footsteps of Shan George, another Nollywood actress who brought her younger,Momoh to limelight some months back. Ure Okezie, an ex-banker cum entertainer is also hooked to Soul E, a singer and much younger lover.Dare Art Alade another entertainer is also married to Kemi, an older lady. However, it was glaring to the discerning mind that their was no intention of marriage because of the 'robotic ' moves of the guy (The guy never said a word) rather, it was a case of someone who needs help and she's got it in Gerald! Are older women sweeter...omg?