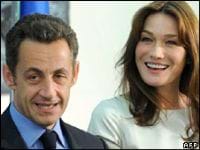 France's first lady Carla Bruni says she will "understand" if the public scorn her album because of who she is. The 40-year-old, who is married to President Nicolas Sarkozy, will release Comme Si De Rien N'Etait (As If Nothing Had Happened) on Friday in France. Speaking to France Inter radio she said: "If people don't listen because I married the president of the republic, I understand." However, the singer added she would be "delighted" if people did listen to it. Whirlwind romance "And if people especially like it, that is what counts for me," she added. Bruni, who wrote 11 of the album's 14 songs, said she was aware the public's response to her third album could be "scrambled" by her marriage to Sarkozy in February. The Italian-born singer said she would not go on tour to promote the album, and added that all her royalties would go to charity. When asked whether she might record a fourth album, Bruni suggested her official role would now take priority. "I don't know if I will be able to write an album between now and 2012," she said, referring to the end-date of Sarkozy's mandate. "If I manage to, I would be lucky." However, Bruni said it was important for women to continue with their careers after marriage. "It is 2008. Women often keep their jobs when they marry, even when they marry someone with such an important job as my husband," she said. The singer married Sarkozy in February after a three-month whirlwind romance. A preview of some of the album was made available on Bruni's website on Wednesday.