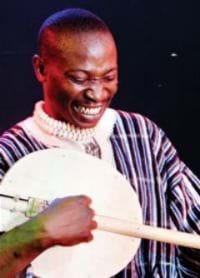 GHANA’S ATONGO Zimba says he owes his success to his koloko, the Northern-Ghana-made guitar with two strings, which has been described as his companion. According to the musician, the lute which most international audiences are passionate about, has made him travel the world. “I made this instrument myself; I fixed it myself and play it myself. This instrument took me far; where I did not imagine going in my life,” he told fans at the British Council where he performed recently. His performances were part of a comeback concert held by the Pan African Orchestra. At the occasion, he treated high profile guests to some of his alluring songs. “Whatever I do with my guitar, I do it well with all my heart,” he said, advising every Ghanaian to do same in their respective fields. Atongo, born in 1967 in Northern Ghana, has become a well-known musician. His grandfather taught him at a very tender age how to build and play the koloko which is also called ‘molo’. The first songs he learned were rooted firmly in tradition, dealing with everyday life in the countryside of Bolgatanga. He was also exposed to popular African music on the radio and like many of his contemporaries, he was enthralled by the sounds of Fela Kuti’s afro beat. This had an influence on his musical development since Afro beat inspired him. He therefore decided to leave his hometown and explore the musical idioms of the surrounding regions. However, Atongo’s own repertoire has also been informed by his countless encounters with musicians from a variety of traditions. His cover version of the polka classic “No Beer in Heaven” is a major hit in Ghana. Atongo Zimba loves to play music and it shows. And indeed, what catch ones’ ear throughout are that distinctive voice, alternately praising, and cajoling, poking fun, criticizing, and caressing members of society.