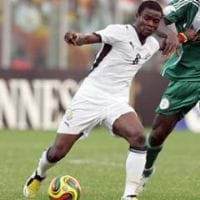 Ghana midfielder, Anthony Annan claims English side, Middlesborough may be interested in signing him. The highly-rated 21-year-old central midfielder, is keen on a move to the Premier League and has put himself in the shop window . Earlier this year, Annan was apparently recommended to Chelsea by his Ghana teammate Michael Essien, but the Blues haven’t taken it further. Annan on the books of relegated Norwegian club IK Start but is currently on loan at Stabaek. Asked if he’s hoping to move to the Premier League, he answered: "Yeah, that’s what I’m hoping. "My agent is working hard for me, and he says a lot about me moving to the Premiership in summer, so I’m looking forward to playing there. "He told me Blackburn, Bolton and Middlesbrough are all interested. My first choice is for a move to England, but I would otherwise think about France or Spain."