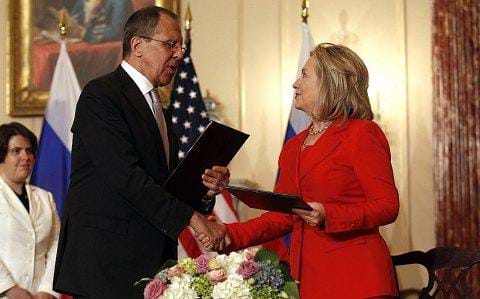 
Secretary of State Hillary Clinton, capping a day of wide-ranging U.S.-Russian policy talks in Washington, said the two powers agree that Libyan leader Moammar Gadhafi’s days in power are numbered. Clinton and her Russian counterpart Sergei Lavrov signed of series of agreements including one resolving a major dispute over child adoptions. The United States and Russia have differed over Libya, with Moscow abstaining on the U.N. resolution authorizing military action in Libya, and criticizing the scale of NATO air strikes. However, at a press event with Lavrov, Secretary Clinton welcomed Russian mediation with the Libyan parties, and said both agree that the crisis must end with Mr. Gadhafi leaving power. “We are still getting contradictory signals from Colonel Gadhafi’s camp," she said. "He has yet to meet the red lines that are set by the international community to cease violence against his people, withdraw his forces and step down from power. So although neither of us can predict to you the exact day or hour that Gadhafi will leave power, we do understand and agree that his days are numbered.” Lavrov said a political process must start between the Tripoli government and Benghazi-based rebels as soon as possible, for a cease-fire and negotiated settlement and said there is no other way to solve the issue. The Russian minister also defended his government’s refusal to back a U.N. Security Council resolution condemning the government of Syrian President Bashar al-Assad for its lethal crackdown on protestors. “You are asking why Russia is blocking the resolution that would condemn Assad. You know, diplomacy does not exist to condemn and start putting on political scores," he said. "Our goal is to solve problems. But just condemning people without any solution will not lead us to anything.” Lavrov said Russia supported a phased lifting of sanctions against Iran linked to incremental steps by Tehran to ease international concerns over its nuclear program. Clinton pointedly did not endorse the idea but said it would be discussed further at the expert level. Clinton and her Russian counterpart signed a series of bilateral accords on, among other things, easing mutual visa rules and disposing of weapons-grade plutonium left over from the Soviet era. The most closely-watched of the accords sets new rules for adoption cases between the two countries, this following an uproar last year when an American adoptive mother put an unwanted seven-year-old Russian boy unaccompanied on a plane back to Moscow. Clinton said the tighter adoption rules will better protect children going both ways to new homes, and meet the concerns of Russians angered over last year’s incident. “We both want the same outcomes. We want all children, whether they be Russian children or American children, to be able to have loving homes with families that will take good care of them," she said. "And of course the United States wants to be sure that we meet all of the concerns that the Russian side raised, and we believe we have.” Foreign Minister Lavrov, who met with President Obama earlier Wednesday, said despite differences on some issues there is a “new quality” to U.S.-Russian cooperation. Clinton hailed what she described as “great strides” in the relationship since Mr. Obama took office two-and-a-half years ago.