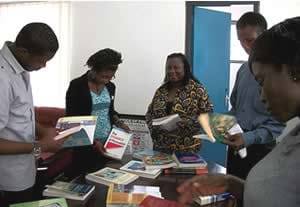 Textbooks For Public Schools Diverted Website
About 29 per cent of English Language textbooks meant for distribution to public basic schools nationwide do not get to the beneficiary schools. “Even though the books are recorded to have been dispatched to the schools, they get missing between the distribution depots and the schools,” Mr Kofi Asare, Programme Officer of the Ghana National Education Coalition Campaign (GNECC) told journalists. “It is obvious that the books are diverted and sold to some private school proprietors because they are hot commodity for the private schools," he stressed. Alarmed by the situation, he said the Coalition had presented a report of the survey it conducted in 2009, to the acting Director-General of the Ghana Education Service for study and necessary action. The survey, he said, was to track the distribution of educational materials to schools, especially at the basic school level, and it revealed inconsistencies in the distribution and receipt of government textbooks, especially English and Science textbooks. He said the survey targeted 160 selected deprived schools in the Greater Accra, Western, Eastern, Ashanti, Central, Volta and Brang-Ahafo Regions, and assessed the flow and utilisation of educational resources such as teachers’ textbooks and teaching and learning materials at the basic school level. "This tracking exercise was necessitated by the apparent lack of correlation between the quality of education investments and educational output," he said, adding that it bad been affirmed by the reports of massive waste in the education sector with one key source of the waste being the distribution of education materials. Mr. Asare said the survey indicated that analysis of textbook supplies and receipts had been complicated by the poor record-keeping culture in some district education offices, noting that in some districts, information on supplies was not available for the three academic years. "The study emphasised the need for the institution of a proper education materials tracking system to monitor the distribution of textbooks, desks and other education materials," he pointed out. Mr. Asare cited an instance where in a district, the textbooks in boxes were kept in the room of the head teacher because the school had no store to keep them. "What is even worrying is that in some of the districts, the head teachers take delivery of the consignment without acknowledging receipt. "They do not sign any supporting document to show the quantities of the textbooks supplied to the school," he said. According to him, results of the survey also depicted a poor state of furniture situation in the deprived schools; where pupils had to carry stools and desks from their homes to sit on in school. Mr Asare said in some cases, it was observed that in the absence of the desks, benches had been provided for pupils whilst they used their laps as tables. He lamented the plight of pupils sitting on the bare floor for classes, saying this situation was common, especially in the kindergarten. When contacted, Ms. Beatrice Zalia Ali, acting Director in charge of Supply and Logistics at the GES, declined to comment on the issue since she had not studied the report. She said the GES would only be in a position to validate the report after studying it and react to the concerns raised by the Coalition.