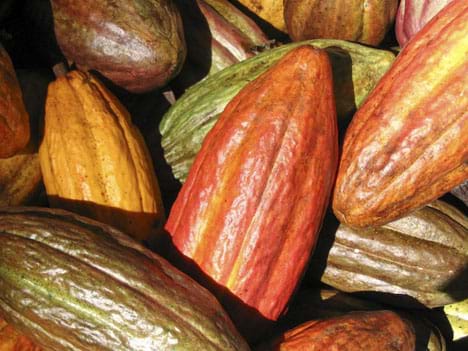 
Cocoa production in the Ashanti Region has been dwindling in the last three years. Figures available suggest that production has declined steadily over the last three seasons which calls for urgent measures to address the negative trend. The 230,000 bags produced in the 2007/2008 main cocoa season diminished to 170,000 bags in the 2008/2009 cocoa season. Stakeholders have attributed the decrease to the lack of maintenance of old cocoa trees, non usage of fertilisers and persistent rainfall which affects proper drying of cocoa beans and, thereby, cause them to rot. According to Mr Akpah Eduku, a Senior Quality Control Officer of the Quality Control Division (QCD) of the COCOBOD, production was, however, expected to rise slightly in the 2009/2010 season. "We expect production to go up slightly this year because there was not much rains in July this year", he said. Mr Eduku who spoke to the Daily Graphic after addressing a farmers forum at Bekwai, advised farmers not to hesitate to cut their old cocoa trees and plant new ones. That, he said, would ensure an increased production. The forum was organised by the Produce Buying Company (PBC) Limited as part of its 10th anniversary celebrations on being listed on the Ghana Stock Exchange (GSE). The theme for the celebration was, "Maintaining the leadership role of PBC Ltd in cocoa and sheanut business". Mr Kwaku A. Gaisie, Ashanti Regional Manager of the PBC, said the decreasing production rate was very worrying and, therefore, urged cocoa farmers to ensure proper fermentation and drying of their cocoa beans so as to enable the country to earn attractive offers on the international market. Mr Gaisie said it was the vision of the PBC to develop and maintain the company as the most attractive dealer in cocoa, sheanut and other cash crops in the West African sub-region. Mr Gaisie explained that, the PBC, in its determination to maximise revenue and profitability had diversified into new areas of viable investment such as haulage, vehicle parking lot at Tema Port and sheanut processing plant at Buipe in the North Region. The Bekwai Municipal Chief Executive, Mr Noah Asante Manu, urged licensed buying companies to introduce incentives for farmers who abide by certification and dry their beans well. He said dried beans fetched the country good prices on the world market and urged farmers to continue to ferment their cocoa beans for six days with two turnings on the second and the fourth days to ensure high quality beans. Awards were presented to deserving farmers and staff of the PBC.