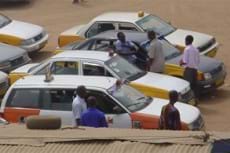 Taxi drivers in Tarkwa and Winneba have embarked on a weeklong strike to seek redress to issues they say militate against the smooth running of their business. Drivers at Tarkwa, numbering about one hundred parked their cars to begin the strike with a demonstration on the morning of Monday, October 11. According to them, their roads are in a deplorable state hinting that they will continue with the demonstration until they are assured of repairs on the roads. They told Citi News the nature of the roads is the cause of the frequent breakdown of their vehicles. “All the town roads are in bad condition. They are full of potholes and our cars are malfunctioning as a result. We need the government to repair the roads for us, if they don’t we will not work. From now till Friday, there will be no cab driver working.” Some aggrieved Taxi Drivers complained. Meanwhile, the situation has left several passengers stranded in the Tarkwa township. Joshua Agyimah, a resident of Tarkwa tells Citi News drivers are unfazed about losing revenue as a result of their strike. “What they are saying is that, they don’t care about the money but they are only interested in the repairing of the road. The place is very noisy and crowded and the police are finding it very difficult controlling the crowd but all the same, they are marching all the way to the municipal assembly and it is going to affect productivity for the day.” He said.