Korea Lauded For Plans To Establish KOICA in Ghana 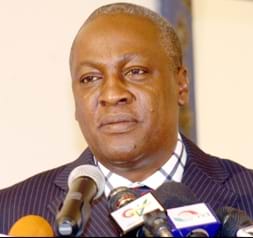 
Vice President John Dramani Mahama has commended the Korean government for their prompt action to open a Korean International Cooperation Agency (KOICA) in Ghana. This would not only foster better relations between Ghana and Korea but would also facilitate trade, investments and other economic ventures in the country in the coming years. Vice President Mahama said when a delegation from Samsung Corporation Limited (Construction, Trading and Engineering Units from Korea called on him at the Castle, Osu. The group called to express interest in building a specialized port at the Cape Three Points in the Western Region to facilitate the haulage of oil and gas. The Vice President in his recent visit to South Korea appealed to the Korean government to open a KOICA office in Ghana that would tighten their ties and create more job opportunities for both countries. KOICA is a Korean Agency that coordinates and oversees the Overseas Development Assistance and other major investments in their countries of operation. The Vice President said though government had the intention of building a deep-sea port to facilitate the haulage of oil and containers, its current priority was to rehabilitate and expand the Tema and Takoradi harbours. He gave assurance to the Samsung Group of Companies that government would collaborate with them in the execution of infrastructural projects such as roads, ports, harbours and housing. "We have drawn elaborate plans to construct a western corridor road that will pass through the Northern and Brong-Ahafo regions to the Western Region and we shall be happy to partner Samsung which has become a household name in Ghana and Africa to work on those projects. " Vice President Mahama said the port project demanded the cooperation of the ministries of Transport and Energy, Ghana Ports and Harbours Authority, Ghana National Petroleum Corporation and Ghana Maritime Authority and would communicate with them as soon as negotiations were concluded. Mr. Han Hyung Ha, Vice President of Samsung, said his outfit was ready to partner Ghana to build roads, ports and houses and appealed to the government to come out with a comprehensive plan of infrastructural development to aid them to plan. He said their development of Cape Three Points would include the development of the town, industrial area and the port area which would not only promote growth and development but would also create jobs for Ghanaians. Also at the ceremony were Jee Sang Hak, the Korean Ambassador, Kim Hoy Jun, General Manager of Samsung, Choi Young Hwan, Seoyeong Engineering Director.