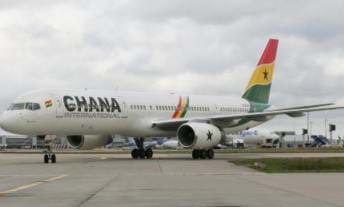 
The Government has released to the Ghana International Airlines Limited (GIAL) funds for the payment of laid-off workers of the struggling airline. The release of the money follows a plea by the Airline’s Board to enable Management settle salary arrears owed the workers. Workers of the Airline were laid off following the company’s inability to sustain its operations and pay its enormous and constantly growing debts. GIAL has over the years struggled to remain operational and at the time of the suspension of operations, Management owed workers four (4) months’ salary arrears in addition to debts owed various utility companies, landlord and suppliers. A statement signed by Deputy Minister for Information James Agyenim-Boateng indicated that Government has released funds to cover four months’ salary arrears plus one month’s salary in lieu of notice, making a total of five month’s salary for each qualified employee. One hundred and eight (108) of the laid-off workers will accordingly receive their arrears and entitlements while the rest will be paid after fulfilling their obligations to the Company. “These are workers who owe GIAL through IOUs and salary advances and their Management has requested that their payments be withheld until their accounts have been reconciled. As Government, we are encouraging these workers to respond to the invitation of Management to have their accounts reconciled so they can be paid.” The statement further explained that government’s intervention is to ensure that the workers are not unduly burdened and financially handicapped. “As a Government that recognises the need to protect our people, we believe that we have to show a humanitarian face and take care of our workers even in times when their actions or inactions may have contributed to their plight.’ The statement noted that Government has paid two months’ salary arrears of the workers still at post as well as their salaries for August and September 2010. Government has also provided temporary office premises for the company after it was evicted from its former premises. The office came with Internet, telephone and other facilities. Government is also providing the funds for GIAL to repatriate and refund ticket costs to the over 9,000 ticket holders the Airline has been unable to fly to their final destinations. “A team is currently working to ensure that all passengers who have not activated their tickets have their monies refunded while those who have already flown one leg are put on other flights to complete their journeys” the statement said.