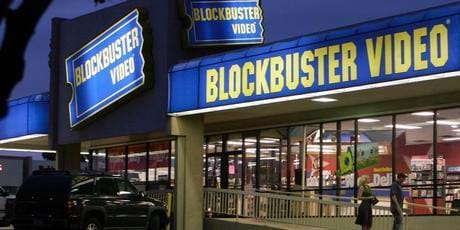 NEW YORK - US movie rental giant Blockbuster declared bankruptcy overnight, falling victim to digital delivery of movies by Netflix and kiosk outlets such as Redbox. Blockbuster's filing for Chapter 11 bankruptcy protection means hundreds of its brick-and-mortar stores are likely to close as the Texas-based company makes a belated attempt to focus on digital distribution. Blockbuster said it had reached agreement with a group of creditors on a plan to bolster its financial position as it tries to turn around the business. The plan would reduce the company's debt from its current level of nearly one billion dollars to about 100 million dollars. Jim Keyes, Blockbuster's chairman and chief executive, said the move will allow Blockbuster to "continue to transform our business model to meet the evolving preferences of our customers." He said Blockbuster enjoys "a well-established brand name, an exceptional library of more than 125,000 titles, and our position as the only operator that provides access across multiple delivery channels - stores, kiosks, by-mail and digital." Blockbuster, which has some 3,000 US stores, had already unveiled plans to close 1,000 outlets. With the reorganisation, between 500 and 800 additional stores are expected to close, according to The Wall Street Journal. Blockbuster said its non-US operations and its domestic and international franchisees, all of which are legally separate entities, are not included in the bankruptcy proceedings. During the reorganisation, all of its US stores, DVD vending kiosks and other operations will be open for business as usual, Blockbuster said. Netflix shares rose 3.45 per cent to 162.35 dollars in early trading in Wall Street on Thursday after gaining more than six per cent on Wednesday on reports that the bankruptcy filing by Blockbuster was imminent. Blockbuster shares have been delisted and are nearly worthless. Netflix, which streams movies to subscribers over the internet or delivers DVDs by mail, has flourished - expanding to Canada on Wednesday, its first venture outside the United States - as Blockbuster has struggled. Netflix, which claims more than 15 million members, introduced a service in Canada that allows subscribers to watch unlimited movies and TV episodes streamed from Netflix to TVs and computers for 7.99 dollars a month. Blockbuster at one time operated as many as 7,200 stores in the Americas, Europe, Asia and Australia but has been forced to close hundreds as consumers moved to other options such as digital video-on-demand. Analyst Michael Pachter of Wedbush Securities said Blockbuster was slow to adapt to changing customer tastes. "Blockbuster waited too long to take Netflix seriously," he said. "And then when they decided to compete in 2004 they didn't do a very good job." Pachter did not write Blockbuster off entirely, however. "There will always be people who like to shop in stores," he said, although that is "a shrinking number of people." Pachter said Redbox, which rents videos from vending kiosks, offers a limited selection and "with Blockbuster you have 10,000 movies per store to choose from." "The question is whether there'll be enough traffic to support brick and mortar," he said.