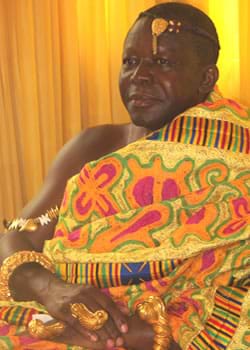 
The Asantehene, Otumfuo Osei Tutu the second says the construction of the Kumasi Sunshine City or Sun City project is in fulfillment of his promise to Asanteman when he descended the Golden Stool 11 year ago. He says after years of success of investments in health, education and chieftaincy, it is time to create jobs for the people. The Otumfuo was speaking at a sod-cutting ceremony to commence work on the Sun City project at the Kumasi Race Course. The multi-billion dollar project is expected to create employment opportunities for the youth, boost tourism and attract international investments into the country. The project will be constructed by the Kenbert Group of South Africa and a team of local and international technical partners. Chairman of the Kenbert Group, Robert Kwaku Asante, says the Kumasi Sun City would be linked to the Kumasi Zoological Gardens and the Centre for National Culture. “The Sun City project when completed will be a multi-purpose world class facility comprising a shopping mall, an amusement park and fitness centre, a five-star fully-equipped international clinic with an ambulance station and a helicopter pad; it will also have doctors’ bungalows and other ancillary staff quarters, a five-star hotel, 240 semi-detached executive houses within eight gated-communities of its own with each community having its own swimming pool and tennis court. “It will interest you to know that the amusement centre will be linked to the Kumasi Zoo, thereby bringing the Zoo back to its former glory. Also the Sun City Project when completed will be linked to the Cultural Centre, and thereby enhancing the center’s activities in the region”, Mr. Kwaku Asante stated. Managing Director of Stanbic Bank, Alhassan Andani who led the team of technical partners, tells the Luv News the team will be meeting to finalized costing and timeline for construction.