The women who love Boko Haram 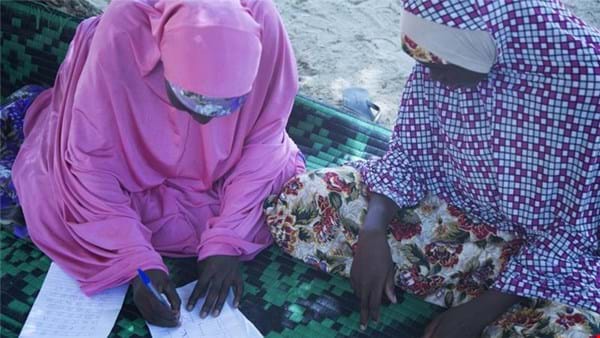 At a safe house in Nigeria, the wives of Boko Haram fighters share stories of the men they married.

Maiduguri, Nigeria - A few dozen women sit on mats in the shadow of a neem tree. Their giggles rise with the hot dusty air as they sketch elaborate designs on their hands with henna.

Some of the women wear abayas; others wear short-sleeved blouses with long skirts and hijabs. They talk about their children, their hair, what they will cook that evening after breaking their Ramadan fast.

After a while, the conversation turns to their husbands.

"Oh, my husband, I love him so much," says Aisha the Amira.

The flamboyant 25-year-old flings her head back as she laughs. In a flowing gown and a tall, majestic head wrap, she radiates the nobility of her title, Amira, or princess. A reddish-orange stone sparkles on her left hand.

"My husband gave me this ring," she says, wiggling her shoulders. "My husband, he's an Arab. So handsome and he always gave me money."

The women look at her in silent admiration.

Then Hauwa speaks up. "He loved me and I loved him. We loved each other." The blushing 14-year-old smiles and twists the hem of her skirt. She has been married for a year and a half.

Fifteen-year-old Iyeza-Kawu looks at the ground as she talks. She's wearing a navy hijab with the logo of the United Nations Population Fund stitched on it. She describes her two-year marriage as a happy one and explains how her husband gave her a dowry of 25,000 naira (about $80).

There is another Aisha, a 27-year-old from Cameroon, who loved her married boyfriend so much that she agreed to elope with him. Her sister and brother didn't approve, so Aisha married him in secret, crossing the border into Nigeria. Her printed blouse hugs her pregnant belly.

Tall and with a chiselled face, Zainab describes her husband as good-looking, quiet and of medium height. "He treated me very well and I loved him very much," she says.

Little Umi, Zainab's 11-year-old daughter, chimes in. "My husband was kind. He would always give my parents money." Umi's cheeks are framed in a dark purple hijab. Her black eyeliner is smudged. When she looks up, the sun lights up her eyes in dazzling shades of brown. She was her husband's third wife.

Esther, 19, knew her husband well before they married. The professional nail cutter used to walk around the neighbourhood reciting verses from the Quran, she says.

All of the women speak in a flurry of Hausa and Kanuri, pausing to gaze at the henna on their hands, swatting flies from their sleeping children and turning around to check on their other children as they swing on a tyre that hangs from a tree.

But there is a sense of sadness and uncertainty to this otherwise typical scene. These women have not seen their husbands in weeks.

Aisha the Amira, Hauwa, Iyeza-Kawu, Aisha, Zainab, Umi, Esther and the others gathered here were all married to members of Boko Haram, the armed group that has been engaged in a seven-year uprising against the Nigerian government that has left more than 20,000 people dead and forced millions to flee their homes.

The women had lived with their husbands in Walasa, a town near the Nigeria-Cameroon border. But in May, Nigerian soldiers reclaimed the area. Most of the Boko Haram fighters fled, leaving their wives and children behind. Iyeza- Kawu's husband was killed in the skirmish.

"My husband was not a terrorist," she says. "The soldiers killed him."

She and 33 other women were rounded up with their children, packed into vehicles and taken to a safe house in Maiduguri where they are now receiving psychosocial treatment designed to rehabilitate them back into society, away from their husbands.

"We will eventually reunite the women with their families and relations here in Maiduguri," explains the state's governor, Kashim Shettima.

But the pregnant ones among them say they fear that their children will never meet their fathers. And some say they have fond memories of their husbands.

Social workers from the state's emergency management agency, a local NGO called the NEEM Foundation and the state's Ministry of Women's Affairs take turns throughout the week to counsel the women.

Their main task is to get the women to talk. But that's not an easy thing to do. The women are cagey, shifting their gazes as they change their stories.

Sometimes they say they didn't know that their husbands were Boko Haram members; at other times they admit to knowing.

The social workers are also a little afraid of the women.

"The first time these women came, we feared them because we know that it's Boko Haram wives who used to bring bombs. They wear the bombs to do suicide attacks," says one social worker who asked that her name not be used out of fear that she would be targeted by Boko Haram. "We also thought that Boko Haram would attack Maiduguri and come and retrieve their wives from this safe house.