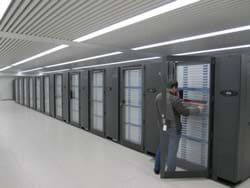 
In the past new supercomputers touted as the fastest in the world have used the latest CPUs and more of them in large arrays. But those days seem to be over as the latest fastest supercomputer relies not only on CPUs, but GPUs as well. Tianhe-1A has just taken the crown as fastest supercomputer managing a performance record of 2.507 petaflops, 30% higher than the supercomputer it replaces at the top of the charts. It has been designed at the National University of Defense Technology (NUDT) in China and resides at the National Supercomputer Center in Tianjin. As well as setting a new performance record Tainhe-1A is notable for its combination of CPUs and GPUs. At it heart are 14,336 Intel CPUs and 7,168 Nvidia GPUs. This is something Nvidia are very proud to talk about and highlight the benefits of. The GPUs being used are Nvidia Tesla M2050s. Nvidia states that by using a CPU/GPU combination the Tianhe-1A consumes 4.04 megawatts of power. Obtaining similar performance with a CPU-only setup would consume over 12 megawatts. Nvidia also claim that to get the same performance out of the machine without GPUs would require 50,000 CPUs and twice as much floor space. The National Supercomputer Center backs up Nvidia’s claims with Guangming Liu, chief of the facility, stating: The performance and efficiency of Tianhe-1A was simply not possible without GPUs. The scientific research that is now possible with a system of this scale is almost without limits; we could not be more pleased with the results. With the combination of the Tesla GPUs and CUDA parallel computing architecture Nvidia is clearly aiming to be active in markets beyond just graphics cards. Jen-Hsun Huang, president and CEO of Nvidia, reinforced such moves by the company stating: GPUs are redefining high performance computing. With the Tianhe-1A, GPUs now power two of the top three fastest computers in the world today. These GPU supercomputers are essential tools for scientists looking to turbocharge their rate of discovery.