Ghana international friendly against Russia to kick off at 4pm 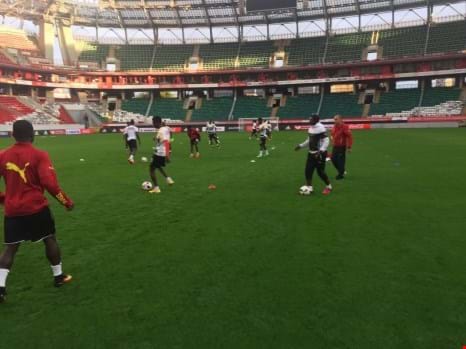 The Black Stars will take on Russia’s senior national team, the Golden Eagles, in an international friendly to be played on Tuesday evening in Moscow. The game which will be played at the Lokomotiv Stadium, will kick off at 4pm GMT (7pm Russia time). Coach Avram Grant's squad flew to Russia over the weekend after their 1-1 draw against Rwanda in their final 2017 AFCON qualifying match. The team held a training session at the match venue on Monday evening with all the players fully involved. The friendly game is part of preparations for the World Cup 2018 qualifiers set to begin in October. The Golden Eagles will be making their fourth appearance at the World Cup after three previous qualifications in 1994, 2002 and 2012 and an automatic qualification for 2018 as host of the tournament whereas the Black Stars is seeking to make a fourth successive appearance at the tournament and need to qualify ahead of Group E opponents Congo, Uganda and Egypt.