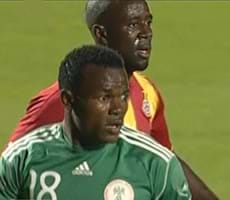 The Black Stars were held by a bruised Super Eagles side to a goalless drawn game in an international friendly played in Watford, England. In a game of few missed chances and quality play, the Stars had a seemingly legitimate penalty kick disallowed whilst Ukechuku Uche hit the cross bar with a well struck shot all in the first half. The game was repleted with a comedy of errors and misplaced passes as both sides experimented with fringe players from the beginning. It was the Stars who were on rampage in the opening exchanges pounding the goal area of the Nigerians but created no clear cut goal scoring opportunity. Pouncing on a reckless back pass from the Nigerian defender, Prince Tagoe was obstructed and shoved to the ground in the vital area by Austin Ejide in post for the Nigerians, but the penalty appeal was ignored by referee Mark Clattenburg. Moments later, Prince Tagoe headed a well whipped Albert Adoma cross on the right, but was too feeble to beat Ejide. As if possessed to open the Stars account, Tagoe again struck from 20 yards in the 16th minute but was well dealt with by the Nigerian goalie. The Nigerians were completely out of sorts in the early embers and seemed to be justifying why they will not be part of the 2012 Nations Cup to be co-hosted by Equatorial Guinea and Gabon. The first serious attack by the Nigerians came in the 21st minute when Kwarasey was forced to pick the ball off the foot of Chinedu Obasi who was getting to the end of a superb cross on the right. Seven minutes later Obasi struck a superb left foot, yards away, which beat Kwarasey in post for the Black Stars but took a ricochet of the goal post. The Eagles had taken over and were dictating the pace. In a moment of brilliance, Ukechuku Uche teasingly outwitted John Paintsil and Isaac Vorsah and struck low, forcing Kwarasey to parry the ball away and was finally cleared by skipper John Mensah. Back from recess, the Stars brought in regulars - Asamoah Gyan, Sulley Muntari and Samuel Inkoom - for Prince Tagoe, Kwadwo Asamoah and Quincy Owusu Abeyie and looked set to open the Stars account, whilst Mikel Obi came in for another Obi in the Nigerian set up. The half promised an electric performance but was boring with fewer chances far-in-between. Gyan, minutes after coming on, spotted a perfect ran from Inkoom and meandered a sumptuous pass to him but the Dnipro defender’s touch failed him with Ejide and the post staring. Adiyiah, who also came in later in the half proved a little selfish in the closing embers when he went for goal instead of setting up Gyan who was closer to the goal post. He had beaten his marker on the left but wasted his effort with an aimless strike. Goalless it ended; both teams appeared satisfied with the results.