Washing Hands With Soap Could Save 40,000 Lives A Year 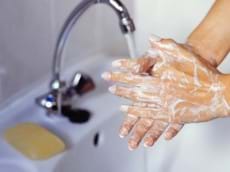 Mr Johnson Appiah, an Extension Services Specialist, working with the Community Water and Sanitation Agency (CWSA), has underlined the need to step up the national campaign on "hand washing with soap" to avoid being infected with preventable diseases. Mr Appiah said this could help save the lives of more than 40,000 Ghanaians annually. He said although research findings had shown that Ghanaians buy a lot of soap, this is mainly used for washing clothes, dishes and bathing. Mr Appiah was speaking at the launch, organised by the Otumfuo Charity Foundation, as part of a water and sanitation programme, to encourage hand washing with soap under running water, among school children, in Kumasi, on Thursday. Lady Julia, wife of Asantehene, Otumfuo Osei Tutu II, joined officials of the PZ Cussons Ghana, teachers and school children at the Jubilee Park for the launch. Mr Appiah said the campaign should be taken more seriously by the people, if the country is to achieve the millennium development goal (MDG), of reducing mortality among children under the age of five by 67 per cent in 2015. He described as totally unacceptable the present situation where most people do not wash their hands with soap after either visiting the toilet or before eating. He said it was refreshing that over 157 school toilets with hand washing facilities had been completed in Ashanti with additional 200 now under construction. Nana Fredua Agyeman Pambuo, Chairman of the Otumfuo Charity Foundation, said it was the beginning of better hygiene habits and cleanliness among school children. He said sanitation and hand washing were part of development and it was therefore important that children were taught proper hygiene. Mrs Gladys Amaning, Metropolitan Director of Education, said proper handling of food already prepared or in the raw state was vital for good health and that it was worrying that a lot of people tend to overlook this. The unhealthy practice serves as fertile condition for germs to contaminate food, resulting in all kinds of infections, she said. She called for attitudinal change in children to maintain good hygienic practices by washing their hands with soap after visiting the toilet, urinal, shaking hands with others, playing and attending to a sick people.