Voices under the rubble' after quake hits Italy; at least 73 dead 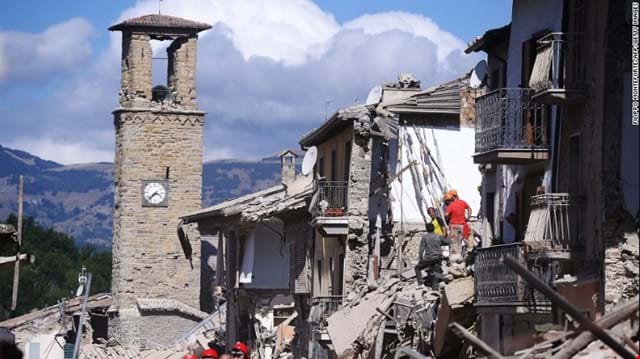 Voices under the rubble' after quake hits Italy; at least 73 dead Website
A powerful earthquake devastated a string of mountain towns in central Italy on Wednesday, trapping residents under rubble, killing at least 73 people and leaving thousands homeless. The quake struck in the early hours of the morning when most residents were asleep, razing homes and buckling roads in a cluster of communities some 140 km (85 miles) east of Rome. It was powerful enough to be felt in Bologna to the north and Naples to the south, each more than 220 km from the epicenter. A family of four, including two boys aged 8 months and 9 years, were buried when their house in Accumoli imploded. As rescue workers carried away the body of the infant, carefully covered by a small blanket, the children's grandmother blamed God: "He took them all at once," she wailed. The army was mobilized to help with special heavy equipment and the treasury released 235 million euros ($265 million) of emergency funds. At the Vatican, Pope Francis canceled part of his general audience to pray for the victims. Rescue workers used helicopters to pluck trapped survivors to safety in the more isolated villages, which had been cut off by landslides and rubble. Aerial photographs showed whole areas of Amatrice, voted last year as one of Italy's most beautiful historic towns, flattened by the 6.2 magnitude quake. Many of those killed or missing were visitors. "It's all young people here, it's holiday season, the town festival was to have been held the day after tomorrow so lots of people came for that," said Amatrice resident Giancarlo, sitting in the road wearing just his underwear. The national Civil Protection Department gave the official death toll of 73 at about 12 hours after the pre-dawn quake struck. Scores more will still believed unaccounted for, with the presence of the summer holidaymakers making it difficult to tally. DISAPPEARING INTO DUST Patients at the badly damaged hospital in Amatrice were moved into the streets. "Three quarters of the town is not there anymore," Amatrice mayor Sergio Pirozzi told state broadcaster RAI. "The aim now is to save as many lives as possible. There are voices under the rubble, we have to save the people there."