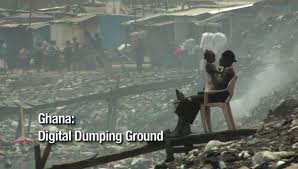 
A group of 10 journalism students from the University of B.C. in Canada has won an Emmy Award for the news documentary Ghana: Digital Dumping Ground. The documentary on the impact of electronic waste, which aired in 2009 on the PBS series Frontline/World, had been nominated in two categories. It won in a category for outstanding investigative journalism during the awards ceremony in New York yesterday (September 27). “Journalists work their entire careers for awards of this prestige,” Mary Lynn Young, UBC journalism school director and associate professor, said in a news release. “Winning these awards early in their careers will give these students a tremendous leg up, and reflects the quality of journalism students and faculty at UBC,” Young said. The UBC journalism students were led in the project by associate professor Peter Klein, who received an Emmy nomination for his documentary Over a Barrel: The Truth About Oil.