Somalia Forces 'Out Of Control' 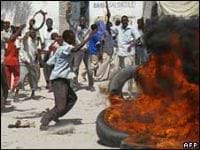 Somalia Forces 'Out Of Control' Website
Civilians are completely at the mercy of armed groups in Somalia, says human rights group Amnesty International. It says the situation is "dire" in the centre and the south with government troops, their Ethiopian allies and Islamist insurgents "out of control". They carry out killings, torture, rape, beatings, arbitrary detention and forced disappearances, a report says. The Ethiopian government has dismissed the report as a "total fabrication" and demanded an apology. "We have said repeatedly that our soldiers are the most disciplined soldiers in the world," said foreign ministry spokesman Wahide Belaye. "They have never cut anybody's throat, never gang-raped any women, never deliberately shot civilians in Somalia." In Mogadishu, hundreds of people have stormed through the Bakara market area, hurling stones at cars and shops and setting fire to tyres in protest at rising food prices and fake currency. Troops shot two people dead on Monday in similar protests. People who have visited the capital, Mogadishu, recently say parts of it are a ghost town, but Amnesty says residents fleeing the city are prey for armed bandits on the road who rape women and girls and steal whatever they have taken with them. Even in refugee camps, Somalis face attack, Amnesty says. It says no-one is offering them any protection. The group says more than 6,000 civilians have been killed in Somalia in the past year. Many of the accounts blamed Ethiopian troops for some of the worst violations - which appeared to be revenge for insurgent attacks, Amnesty says. "Nothing justifies gang rape, slitting the throats of civilians or disproportionate attacks," Amnesty's Michelle Kagari told the BBC. In one case, "a young child's throat was slit by Ethiopian soldiers in front of the child's mother," the report says. But this was strongly denied by the Ethiopian government, which says "the cutting of throats of even enemies is not in the tradition of Ethiopian troops". 'Eyes gouged out' In another incident, the report quotes Haboon, 56, saying Ethiopian troops raped a neighbour's 17-year-old daughter in 2007. When the girl's two brothers tried to help her, Ethiopian soldiers gouged out their eyes with a bayonet, she said. The Ethiopian and Somali governments say they are fighting al-Qaeda-backed militants. They frequently use road-side bombs to target troops from the two armies. Last week, Aden Hashi Ayro, a senior commander of the militant group al-Shabab, was killed in a US air-strike. Amnesty calls on the UN to condemn the violations in the strongest terms, strengthen its weapons embargo, increase its monitoring capacity, and set up a commission of inquiry. Riots At least two people were shot dead in the capital, Mogadishu, on Monday when troops opened fire to halt riots over rising costs and counterfeit money. Thousands of people rioted, burning tyres and throwing stones after traders refused to accept local notes and demanded US dollars instead. The recent printing of local shilling notes on illegal presses has led to spiralling inflation, reporters say. This and the increasing insecurity have seen food prices double. Somalia has been without a central government for more than 17 years and for the past 17 months, the Ethiopian-backed interim government has been struggling to exert its control over the country. The United Nations reports that soaring food prices have already forced more than a third of all Somalis to rely on outside assistance to feed their families. Last week, the UN Food Security Analysis Unit warned that the country was facing a major famine caused by a prolonged drought and the soaring food prices. It said that half of the population would need food aid by the end of the year and that hyperinflation, the devaluation of the Somali shilling and the relentless armed conflict were making it more and more difficult for the urban poor to get enough to eat.