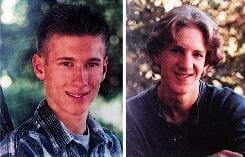 Shooter's Mom Speaks Out Website
DENVER (AP) — Parents and survivors of the 1999 massacre at Columbine High School are saying good things about an essay released Tuesday by the mother of shooter Dylan Klebold. Susan Klebold made the most detailed public remarks by any parent of the two Columbine killers in an essay published in O, The Oprah Magazine. She said in the essay she had "no inkling" her son was suicidal or depressed. The essay sparked strong emotions for Connie Michalik, whose son, Richard Castaldo, was shot and partially paralyzed in the rampage. Dylan Klebold and Eric Harris killed 12 students and a teacher and wounded 23 others before killing themselves. The shooters' parents have said little in public since the massacre. They gave depositions in a lawsuit filed by victims' families, but a judge in 2007 ordered those depositions sealed for 20 years after the case was settled out of court. Survivors and their families have been left wondering about the boys' parents in the decade since the shootings. "You know, I always wondered how she felt and what she went through. 'Cause I know I went through a living hell, and I was always sure she did, too," Michalik told The Associated Press. Michalik, who has never met Susan Klebold, said reading the essay answered some of her questions about the Klebold family. "I applaud her for the courage to talk about this," Michalik said Tuesday. In the essay, Susan Klebold described the day of the shooting. She at first feared Dylan had been shot at school, not that he was one of the perpetrators. Susan Klebold said the family was evacuated from their home the afternoon of the massacre because authorities feared even Dylan's residence may have been rigged to explode. Still, she said, it took months for relatives to accept that the quiet boy who loved origami and Legos was to blame for the violence. "We didn't know that he and Eric had assembled an arsenal of explosives and guns," Susan Klebold wrote. "We believed his participation in the massacre was accidental or that he had been coerced. We believed that he did not intend to hurt anyone." The magazine released excerpts from the essay last week and published the full text Tuesday. A magazine spokeswoman said Susan Klebold has turned down several interview requests over the years but agreed several months ago to share an essay. There were no plans for her to appear on Oprah Winfrey's TV talk show. In an introduction to the essay, Winfrey told readers, "Since the day her son participated in the most devastating high school shooting America has ever seen, I have wanted to sit down with Susan Klebold to ask her the questions we've all wanted to ask — starting with, 'How did you not see it coming?' and ending with 'How did you survive?"' A spokeswoman for Susan Klebold has said there would be no further comment. One of the shooting's survivors, Krystal Miller, said Tuesday she has long had questions for the Klebolds but understood their silence. "Over the years I would've loved to hear something," said Miller, whose maiden name was Krystal Woodman. "But it sounds like she is still just reeling from it and processing it. So how is someone supposed to come out and give answers when they're still trying to figure it out themselves?"