Mills Urges Ivorian Leaders To Respect The peoples' Will 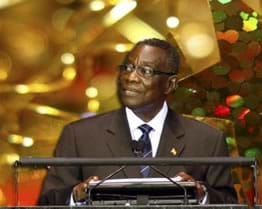 
The President, Professor John Evans Atta Mills has urged the various political players in the Ivorian election run-off to accept the results and view it as the will of the people. President Mills made the remark when he held bilateral talks with the president of the European Council, Herman Van Rompuy, on the sidelines of the ongoing AU-EU summit in Tripoli Libya. The President further assured the European Union that unconstitutional governments or takeovers are a thing of the past, particularly in the West African sub-region. The President in his interactions cited examples of Burkina Faso, Togo, and the ongoing presidential election re-run in Cote d’Ivoire as examples of how far the region has come in democratizing itself. It is in the light of these and the many benefits of democracy to the people that Professor Mills cautioned the various political players in the Ivorian elections to respect the will and mandate of the people. Cote d’Ivoire is currently awaiting results of the re-run of Presidential elections and worries have been expressed as to how the two main challengers would accept the results. Professor Mills told European Council President Herman Van Rompuy, that West Africa has dumped its past unconstitutional power takeovers and is on the highway of democracy. Touching on Ghana’s relations with the European Union, Professor Mills appreciated the various supports that the EU has been giving to Ghana and said the nation will need more of such assistance to continue its development march. According to him, although the country’s fortunes are bound to change with the drilling of oil in commercial quantities, investment in infrastructure is needed and that is where he believes the EU will be of great help. On his part, Herman Van Rompuy commended Ghana for her democratic credentials and efforts at ensuring peace in the sub-region. He pledged the European Union’s support to help Ghana achieve its developmental agenda. He was particularly excited about the President’s remarks about how committed the West African sub-region is to democracy and expressed optimism that it will catapult the region into great economic growth. Earlier, the President had held bilateral talks with the Presidents of Benin, Togo, Equatorial Guinea, Gabon and Cape Verde where issues of mutual importance and regional significance were discussed.