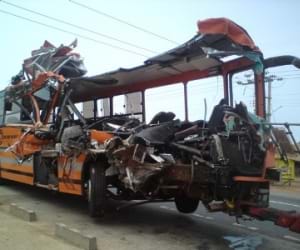 Government has presented GH¢ 10,000 cheque to accident victims of the Tamale-Savelugu Highway road crash that occurred on Saturday November 26, last month. The money is to be used to settle bills of the injured and also support the bereaved family towards the burial service of the 28 people who died. Mr. Moses Bukari Mabengba, Northern Regional Minister, who made the presentation, commended the management and staff of the Tamale Teaching Hospital (TTH) for their tireless effort towards the rapid recovery of the injured. He said most of the road crashes in the Region were caused by human error, which the last accident was a classic case, and encouraged passengers to check drivers to drive responsibly. The Minister called for a collaborative support between stakeholders in the transport sector and the public to help check accident, especially as the Christmas and New Year festivities approach. Mr Mark Wayongo, Upper East Regional Minister, who was also present said he had suggested to the officials of the Metro Mass Transit company to fix seat belt in all their vehicles and also ensure passengers wear them. He urged transport operators to take details of every passenger for easily identification in case of emergency, “Some of the dead bodies could not be identify due to lack of identity”. Dr Solomon Gumanga, Acting Chief Executive Officer of the TTH, commended the government for the support and assured that doctors at the hospital would always live up to their responsibilities. He said most of the victims had been discharged with the exception of eight people including a young-man who was being prepared to be transported to Accra for further treatment. On Saturday November 26, 2011, a MMT Bus, with registration number AS9905Y, travelling from Bolgatanga to Tamale collided with a Benz bus with registration number AS7510F, which was on its way from Kumasi to Bolgatanga.