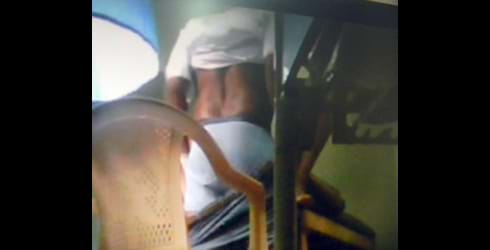 NEWS-ONE has watched a secretly recorded video that captures a Ghanaian medical doctor forcing his female patients to have raw unprotected sex with him right in his theater.

The women, some of whom are known faces in society, had gone to the clinic for surgical abortion at various times and the doctor, after making them strip naked for the operation, forced them to have sex with him with an excuse that without the sex, the abortion would not be successful.

The doctor is currently in police grips being prepared for court as investigations continue into his case.

The must-watch video was secretly recorded by mysterious investigative journalist Anas Aremeyaw Anas, at a private clinic located at Madina, a suburb of Accra. The scenes are mind-boggling and the acts are brutal.

The name of the clinic starts with the letter ‘U’ but the full name would be withheld for now because the illegal acts of the doctor seem to have been secretly done on the blind side of the clinic’s management.

For the three-month period that Anas and his team planted the secret cameras in the theater, the doctor was captured having sex with over 52 different ladies who had gone to him for abortion. The women were aged between 20 to 40 years and were charged various amounts ranging from GH¢150 to GH¢400, depending on the age of the pregnancy. He told the unsuspecting women, midway into the abortion, that unless an erected penis entered them, the exercise would be excruciatingly painful and almost unsuccessful so they had no choice but to let him enter.

Interestingly, the doctor slept with all the women without using a condom and he bonked them standing, while they lay haplessly on the operation bench.

Anas, in planting the camera, had to disguise himself as a cleaner and then later as a medical assistant sort of. Reports say portions of the must-watch sex video would be shown on Multi TV’s Joy News Channel on Wednesday, September 5, at 6pm.

The investigation is part of Anas’ Wild Ghana project in which he would be collaborating with Multi TV to investigate and capture on video some of Ghana’s most atrocious crimes.