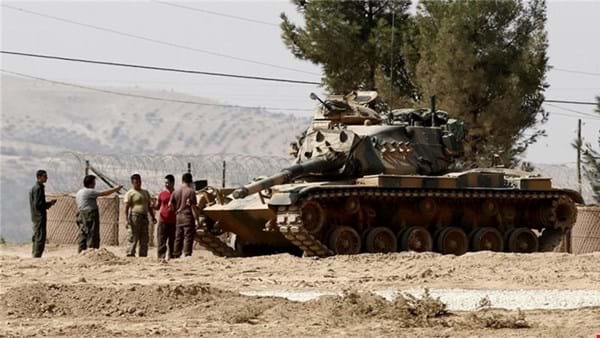 A bomb blast at a Syria-Turkey border crossing has killed at least 29 rebel fighters and wounded at least 20 more, witnesses and a monitoring group reported.

Thursday's blast took place on the Syrian side of the Atmeh crossing, west of Aleppo. A photo sent by a witness in the area, purportedly of its aftermath, showed bloodied corpses lying on the ground, the Reuters news agency reported.

Most of the rebels were from a Turkey-backed group called Failaq al-Sham, Reuters reported witnesses as saying.

According Al Jazeera's Zeina Khodr, reporting from Turkey's Gaziantep on the border with Syria: "Atmeh is a border crossing that [Syrian] rebels use to move from one area of northern Syria to another; because, as of late, the [Syrian] government cuts through their territory and they've been isolated in different pockets."

"We understand that they were waiting to cross the border [when the explosion happened]. There are conflicting reports as to what caused the explosion, but ISIL has claimed responsibility for it," she added. "So the rebels are coming under pressure, not just from the government, but from ISIL as well."

The UK-based Syrian Observatory for Human Rights reported that the blast was either caused by a suicide bomber or a remotely detonated bomb.

A Syria-based group, the Local Coordination Committees, said the blast was caused by a bag filled with explosives that went off on the Syrian side of a border crossing.

Turkey's state-run Anatolia news agency confirmed that the blast left at least 20 people dead at Atmeh, adding that it took place during a "change of guard" among Syrian rebels in the area.

Turkey is backing the rebels in an offensive against the Islamic State of Iraq and the Levant group (ISIL, also known as ISIS) further to the northeast, along a separate stretch of border.

Ankara began the cross-border Operation Euphrates Shield on August 24, saying it was targeting both ISIL and the Kurdish YPG militia, which Turkey considers a "terrorist" group.

Rebel fighters have been targeted at the Atmeh crossing before. ISIL claimed responsibility for a mid-August suicide attack there that killed at least 32.

The rebels use the crossing to move between the Syrian province of Idlib, through Turkey, to areas of Aleppo province along the border where the fight against ISIL is taking place, the Syrian Observatory said.

Also on Thursday, Syrian government forces seized about half of a key opposition-held neighbourhood in Aleppo, in a new advance against rebels, the Observatory reported.

Fighting had been raging in the residential Bustan al-Basha quarter near the city centre, one of the frontlines in Aleppo which has been divided for years between government and opposition areas of control.

The Syrian military said in a statement that its forces had advanced in Bustan al-Basha.

Government forces have, with the use of heavy aerial bombardment, encircled Aleppo's rebel-held eastern sector in recent weeks and are seeking to completely recapture the city.