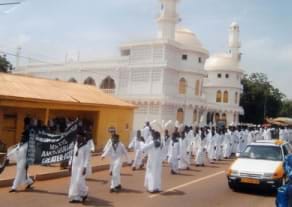 Members of the Majlis Ansarullah, Ghana in a route march.


Mr. Abu Muhammad, National President of the Majlis Ansarullah (Ahmadiyya Muslim Elders Association of Ghana), has urged Ahmadi Muslim elders to educate their communities and the youth in particular, on the benefits of leading moral lives and abiding by what they teach as role models so that they can positively influence their environments. Mr. Abu Muhammad made the appeal in his welcome address at the 27th national annual convention of the Majlis Ansarullah held at the Tamale Senior High School, Tamale. The convention with the theme, ‘Moral and spiritual challenges of the time – The Ansarullah Response,’ was attended by over 5,000 members of the Association from all the 10 regions. It also had delegates from Nigeria and Togo. Mr. Muhammad said mankind was facing moral challenges that impinged on both spiritual and material development, stressing that “if good morals do not influence individual, group, community and international interactions and relationships, the entire society suffered.” He condemned the atrocities meted out to innocent Ahmadi muslims especially in Pakistan, India and Egypt by the opponents of the Ahmadiyya Muslim Community worldwide, saying “the Ahmadiyya Muslim jama’ at is a peace-loving community. Our reaction to these atrocities is for us to supplicate earnestly to God, hoping our supplication will never go in vain.” Mr. Moses Magbenga, Northern Regional Minister, who was a special guest speaker, urged members of the Association to be responsive and God-fearing, and commended the Ahmadiyya Muslim Mission of Ghana for its enormous contributions to the socio-economic development of the country. He said Ahmadi Muslims had also been assisting some deprived communities by providing them with bore-holes through Humanity First, non-governmental international organisation of the Ahmadiyya Muslim Mission. He appealed to the Association to pray continuously for peace and development of the Northern Region. The acting Ammer of the Ahmadiyya Muslim Mission of Ghana, Alhaji Muhammad Yusuf Yawson, who chaired the occasion, said “the world is full of iniquities, and in our socio-economic interactions, one has to do well to resist temptations of all sorts,” adding that human life and good morals were no more the cherished values of the society. He urged members of the Association to be “ambassadors of peace and love and doers of good deeds.” As part of the activities to climax the convention, the members organised a route-march through the principal streets of Tamale. Prizes were given to some deserving members and invited guests.