Presidential Jet Is A Credit To Kufours' Selflessness | Kweku Baako 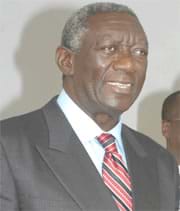 Former President J.A. Kufuor exhibited remarkable quality leadership when he initiated the process to procure a presidential jet for the state, Malik Kweku Baako has said. The Editor-in-Chief of the New Crusading Guide newspaper, speaking Joy FM’s news analysis programme, Newsfile, said the former president’s selflessness and foresight backed by a willingness to do what is right regardless of the political ramifications, must be commended. Mr Kufuor laid the grounds for the procurement of two executive jets – a Falcon 900 and an Airbus - in 2008 in a deal that was described by opponents as profligate spending by an insensitive government. The then opposition National Democratic Congress (NDC) argued it didn’t make economic sense to buy two executive jets at the same time when President Kufuor, for reasons of political expediency, refused to use a Gulfstream jet bought by his predecessor, Jerry John Rawlings. There was a lull in the protracted debate until this week when Vice-President John Mahama commissioned the Falcon 900 at a ceremony where he announced government’s plans to procure eight more aircraft to augment the fleet of the military. That reignited the debate, and Mr Kweku Baako, quoting extensively from documents, argued that former president Kufuor was unjustifiably vilified over the transaction. He said the military had after technical examination and consideration recommended to Mr Kufuor’s government to buy some six aircraft with two of them being executive jets. Mr Baako reported the Communications Squadron of the Air force as arguing the fleet of the unit were bought in 1978 and were due to be grounded by 2010 – after having been used for 30 years. The military according to, Kweku Baako, said the air force will be incapacitated post 2010, if new aircraft were not procured. Recognizing that request for new aircraft took at least two years for the manufacturers to deliver, president Kufuor, the vociferous social commentator related, activated the process to meet the needs of the military by ordering the Falcon 900 and an Airbus – which the air force specifically asked for – in 2008 so that it will be delivered in 2010 – when the existing Fokker 28 and the three Fokker 27 aircraft would have been retired. The New Crusading Guide Editor-In-Chief said Mr Kufuor, who was not going to be in office by 2010, could have said ‘well I won’t be in power by 2010 after all, so buying jets for the military should be my successor’s headache, not mine,’ but instead he went ahead to order the planes. A Presidential Aide, Stan Dogbe, who was also on the show rejected suggestions NDC’s opposition to the purchase of the presidential jets was for opportunistic political purposes. He said the NDC’s stand on the issue was based on principles and that the economic conditions at the time clearly did not support the amount of money the government then was spending on the acquisition of the two presidential jets. For him, the economy has improved under the Mills administration and that government could afford to retool the military. He accused sections of the public of deliberate misinformation regarding the other jets to be procured by the government. According to him, a false impression was created as though those jets were also executive jets when in fact that is not the case. Mr Stan Dogbe rejected suggestions that the government could have cancelled the purchase agreement if it was truly opposed to acquiring the executive jet, arguing the state would have lost a colossal $7 million if the government attempted such a thing. But NPP Member of Parliament for Akai-Koi South, Nana Akomea disagreed. He said there was no such thing as the government of Ghana losing that amount of money if it chose to discontinue with the purchase. Television talk show host, David Ampofo, regretted the persistent partisan debates on virtually every issue of national interest. He stressed the need for a closure to be brought to the debate on the issue of presidential jets.