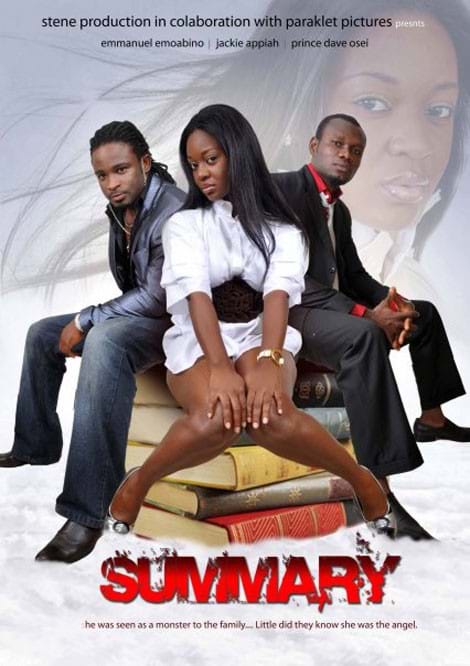 Another interesting movie with a good cast line titled ”Summary” is hitting our cinemas soon. “Summary” is produced by Emmanuel Emoabino and directed by Willie Ajenge. On the cast sheet are African Movie Academy Best Actress winner-Jackie Appiah, David Prince Osei, Emmanuel Emoabino and others. “Summary” has an interesting storyline of Chris and Lisa not being the best of friends,in fact Chris considers Lisa to be his worst enemy yet he agrees to marry her with the understanding that they are not to have any sexual intercourse or any emotional involvement, and that they are free to cheat on each other whenever they feel like it. Though Lisa agrees she still has this strong feelings for Chris. Chris on the other hand is madly in love with his ex-fiancé who is married to another man. Hovering in the background is Mike, Chris’s younger brother. A lazy, crooked, disloyal guy, who was disowned at first after he forcefully took his share of thefamily fortune and squandered it on a wayward life abroad. Forgiven and accepted back into the family, he is naturally envious of his brother who is the favorite in his family. He sees a way to exploit the complicated marital relationship between his brother and his wife. Neglected and frustrated, Lisa becomes an easy target of his charm. She falls for the handsome dashing Mike and agrees to be part of his dangerous plan of eliminating Chris her husband so that he would inherit the family fortune as the only child and marry her after his brother’s death. When Chris finds out about the affair between his brother and his wife, he decides to punish Lisa by sleeping with the house help. Now the maid is pregnant, his ex-fiancé wants a divorce from her husband so she can follow Chris, Lisa then finds out that Mike has another hidden agenda, so she backs out of the initial plan of killing her husband and instead starts fighting to save his life at the risk of loosing hers. Eventually Chris reveals the reason why he never wanted to sleep or be involved with his wife even though he finds her very attractive. It also turns out also that Doris the house help had her own plans from the beginning with an unknown lover to destroy Chris’s home. So everybody in the house has a hidden agenda and can not be trusted.