Will Smith Voted 'Most Bankable Actor' 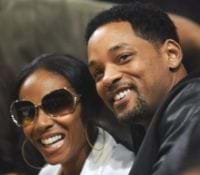 Will Smith has been named Hollywood's most bankable star in a survey released by financial website, Forbes.com. The star, who began his career in TV has starred in a broad spectrum of films from romantic comedies like Hitch to thrillers like I Am Legend. Forbes' John Burman said: "People just like watching him on screen." A panel of movie industry professionals named Johnny Depp, Leonardo DiCaprio, and Hollywood super-couple Angelina Jolie and Brad Pitt as runners up. Box office success The stars were ranked on their ability to attract financing for a new movie. Other factors taken into account are previous box office success and different audience demographics. Smith's latest movie, Seven Pounds, was released in December and has made more than $141.6 million (£98.2 million) worldwide. He also starred in last year's summer hit Hancock, which made more than $624.4 million (£433.4 million) worldwide. In January, the actor was voted the top money-making movie star of 2008 in an annual poll of US cinema owners and film buyers. Tom Hanks, George Clooney, Denzel Washington, Matt Damon, and Jack Nicholson all appear in the poll's top 10.