We brought 'the Trophy' to Ghana 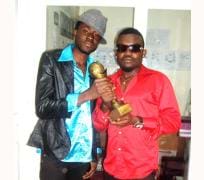 Just when the Black Stars of Ghana are assailed on all sides for failing to bring home the World Cup trophy, Ruff & Smooth has managed to bring home a replica of that trophy for showing their dexterity behind the microphone. Ruff and Smooth of Swagger fame did Ghana proud when they won a prestigious award in Nigeria. The Swagger Boys won the Ghana Music Group of the Year category at the awards ceremony organized by the famous CITI People Entertainment in Ikeja, Lagos, Nigeria. “Now that’s the swagger!” they chorused as they spoke to Hitz FM, in their first interview granted the media after the award. Music sensation Becca won the Best Female Artiste from Ghana category whilst Actress Jackie Appiah was awarded Best Actress from Ghana. The duo – Ricky Nana Agyeman and Clement Baafo – are talented gentlemen who are inspired by nothing, but good music. Before merging their skills into their current brand, the two were individually into music and struggling to make a mark. In 2007, Ricky invited Clement for a collabo when the former was recording a track with JQ Music Production in Accra, titled Give me love. The encounter must have proven too well to allow wasting and wilting, and that was when the two hit upon the idea of forming a group; Ruff & Smooth was born. According to the two gentlemen, they came by the name Ruff and Smooth, due to circumstances they found themselves in at that time; life, indeed, was rough for them but now it’s becoming smooth. Between 2008 and 2009, Ruff and Smooth came out with several singles such as Monalisa, No Bull Shaking and Empress. All along, according to the duo , Nat Kwabena Adisi , aka , Bola Ray, was their soul financial pillar as they depended on him for almost everything, from studio bookings to production costs. In 2009, Ruff and Smooth signed under the record label, Empire Entertainment, a company managed by Bola Ray. Ruff and Smooth have to their credit hit singles including Swagger, Sex Machine, Monalisa and the latest, Azingela. Under just one year of being together, Ruff and Smooth, have featured in major international performances around the world and in Ghana. “We only thank the almighty God, for this height we have achieved, in such a short period and our record label, Empire Entertainment, for projecting us this far,” Ricky said while Clement nodded in approval. But apart from their latest award from Nigeria, they said their recent nomination for the Afro pop Song of the Year award at the Ghana Music Awards was a major morale booster. Ruff and Smooth is currently promoting their latest album titled Life is Ruff and Smooth, a compilation of all their hit songs plus a fresh one Never Never Heard Before. Ricky and Clement said plans for the rest of 2010 include a scheduled tour around Ghana, which is currently ongoing. “Plans are also afoot to tour the USA, Canada, Holland and the United Kingdom,” Clement said. Story by Reindolf Ofosu/HITZ FM/Ghana