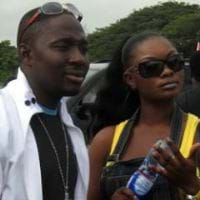 Showghana.com can confirm that one of Ghana's sweet actresses, Beverly Afaglo who has stared in several movies in Ghana and Nigeria and doubles as a presenter of Metropolitan Television's 'Beauty and Style' is dating Praye 'Ho ne Ho', one of the hottest guys in the Hiplife trio, Praye. Our sources say the two love birds who have been dating for the past two years and half have been spotted at secret places on several occasions enjoying love 'In Da Air'. Watch Video: Jacket by Praye feat. Hiplife All stars When Showghana.com contacted the pretty actress over a cup of coffee in Accra, she confirmed the story saying she's totally in love with the young guy who is in his late twenties. Praye 'Ho ne Ho' known in private life as Eugene Boadu Baah also confirmed the story stating that he cannot do without the actress, Beverly. Eugene added that Beverly is a sweet and lovely girl but' very stubborn'. Well… Showghana.com can only wish them the best. Meanwhile, Beverly Afaglo has hinted her dream is to go to Hollywood and rub shoulders with the big girls like Angelina Jolie, Jennifer Lopez and the likes. She is hoping to bring variety of true and unique talent to the entertainment industry. Recounting how she started, she said a friend of hers introduced her to Rodger Quartey, a production manager with Venus Films International who later realized she has something positive to offer to the world of entertainment. Beverly is a professionally trained beautician from Forever Claire (FC) Beauty Clinic in Accra. According to Beverly, acting has also come to her as a passion, but that notwithstanding she also believes that presenting shows on TV is something she loves to do with all her heart. Beverly Afaglo has acted in several Ghanaian movies including Big Girls Club, Total Exchange, Frozen Emotions, Return of Beyonce, Crime to Christ, Play Boy, Remnant-a new series on NET2 TV, Something About Ana-a movie she shot in Nigeria yet to hit the market amongst many others.