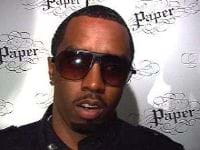 P Diddy says he could win an Olympic gold medal for sexual stamina. The music mogul claims he would win the top prize if he took part in a contest to see who could have sex for the longest amount of time. When asked what brand new Olympic title he thought he could win, P Diddy replied: "Who could have sex the longest! I think that's an event I can do well in. "And probably who could stay up the longest. Just so you know, that's supposed to be funny... even though I am serious." When queried on who his competitors might be, he added to New York magazine: "Whoever's up for the challenge." The rapper has previously boasted his sexual performance is so good he "makes women's legs shake". However, Diddy also insists he has a more sensitive side and likes being romantic. He said: "There was this young lady recently that I invited to a party but it was a party with just me and her, you know what I'm saying? And I'd made a playlist of all the songs that reminded me of her. Because most of them were slow we ended up dancing and then things progressed. "I'm definitely a romantic - I'm a helpless romantic."