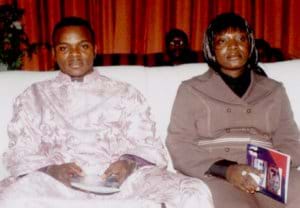 Gospel singer Florence Obinim has jumped to the defence of her husband, Bishop Daniel Obinim, leader of International God’s Way Church, who is under fire after his extramarital affair with the wife of another pastor reached the media. Bishop Obinim has admitted that though he had read in Exodus 20:14 that “Thou shalt not commit adultery”, he had a secret sex relationship with Gifty Pokuah, the wife of a junior pastor of his church. In the heat of the ground-breaking confession from the bishop, his wife, Florence Obinim, has expressed anger over the public’s perception that Bishop Obinim was the one who wanted to have sex with the lady. Florence Obinim told Kumasi-based Nhyira FM that Gifty Pokua rather sent romantic text messages to Bishop Obinim, begging him for sex and asking that he makes her his second wife. She accused Gifty of blackmailing Bishop Obinim because he was no longer interested in bonking her or fulfilling her material demands. According to the gospel singer, the lady had been begging Bishop Obinim for sex and that though the Bishop committed adultery with the woman a couple of times, that was a long time ago and the matter should be laid to rest. She disclosed that Bishop Obinim personally informed her about his adulterous relationship with Pokuah, who was then not married and that she had since forgiven her husband. According to Florence, she and her husband fasted and prayed fervently to God to forgive Bishop Obinim for breaking his wedding vows and she was sure God had listened to their prayers. The gospel musician said she had forgiven her husband who had repented and had stopped sleeping with Pokuah “so this matter is not new to me”. She said Bishop Obinim stopped having the immoral affair with Pokuah long before William Fobi, a young pastor of the church, got married to Pokuah. Florence Obinim noted that the matter had died down a long time ago and both Pastor Williams and his wedded wife Pokuah had even stopped attending Bishop Obinim’s church. According to her, just recently, Pokuah popped up again and tried in vain to continue having an immoral relationship with Bishop Obinim. She said Pokuah became furious when Bishop Obinim did not agree to her sinful demands. Pokuah, she alleged further, though a wedded woman, had been sending text messages to Bishop Obinim’s mobile phone, telling the pastor to put a wedding ring on her (Pokua) finger to make her his second wife. After Bishop Obinim had turned this offer down, Florence alleged, Williams and Pokuah recently popped up, requesting from Bishop Obinim a mansion, a flashy car and GH¢200,000 before they would keep quiet about the issue. Florence Obinim said Pokuah and Williams were blackmailing Bishop Obinim because the beleaguered pastor failed to acquiesce to some exorbitant demands they made to him. Florence Obinim praised Bishop Obinim for mustering the courage by personally confessing to her when he had an immoral affair with another lady outside his marriage. She said she loved Bishop Obinim so much because “it is him who made me know that Heaven exists and I love him so much”. According to Pastor Fobi, Bishop Obinim encouraged him to marry the woman and even went ahead to arrange and officiate the marriage ceremony five years ago. The junior pastor said it was only a few months ago that he got to know that Bishop Obinim and the wife were sex partners before the marriage and had since remained sex partners, though the bishop was legally married to Florence Obinim.