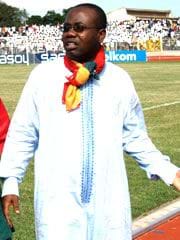 Ghana Football Association (GFA) Boss, Kwesi Nyantakyi has condemned superstition in football, known in local parlance as ‘juju’, which is gradually worming its way into the Onetouch Premiership. He emphatically stated that any club that performs superstitious acts that impede the smooth running of the league would be severely punished by the Disciplinary Committee of the GFA to serve as deterrent to others. Drama was said to have unfolded at the Wa Park last Sunday when All Stars played a goalless drawn game with Ashantigold in a 23rd week duel of the premiership. Instead of the original eleven players each, the two teams with reasons best known to themselves, surprisingly paraded 10 players each for almost 75 minutes of the game. According reports Philip Boampong of Ashantigold and Owusu Sefah of Wa All Stars stayed on the touchline until about 15 minutes to the end of proceedings before joining the game. The unfortunate incident which occurred in the absence of the GFA Boss has been greeted with massive condemnation by the entire sporting fraternity. About his views on the unsportsmanlike behaviour exhibited by the two teams, Mr. Nyantakyi said, “According to FIFA rules a club can decide to parade seven players for a particular game; that is the prerogative of that particular club. “But if the two teams acted that way due to superstitious means, then we should apply stiffer punishments on them as soon as possible because FIFA frowns on ’juju’ in football”. To totally uproot ‘juju’ from Ghana football, the GFA Boss advocated for the application of FIFA laws.