Mariah's A Self confessed Bible Bookworm 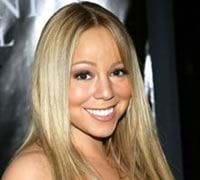 Mariah Carey says the only book she has ever read is the Bible. The Touch My Body singer - who married singer Nick Cannon earlier this year - admits she rarely has time to sit down and read, but always ensures she has time to read the holy book. She said: "The only book I make time to read is the Bible." Mariah can't even find the time to read when she is on holiday because she is too busy swimming and sunbathing. She added to Now magazine: "I don't get much time off, but I make sure there are periods on my schedule when no work is allowed. The best way is to go on vacation. I love tropical places and swimming in the sea. The most secluded a place is, the better." It was recently revealed Mariah is trying to stop a tell-all book about her from being published. The singer is said to be so concerned by revelations set to appear in a new tome written by her former record producer Damion 'Damizza' Young she is desperate to prevent it going to print. Damion has announced he intends to reveal his "intense four-year personal relationship" with the star in Guilty By Association. However, the 38-year-old songstress has ordered her lawyer Sonya Guardo to write a letter to the music mogul, reminding him of the confidentiality agreement he signed which prevents him from legally revealing any sensitive information about her.