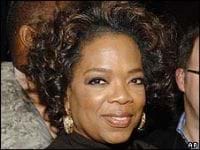 A Louisiana man has filed a lawsuit against Oprah Winfrey, claiming she and an attorney made false statements that led the FBI to arrest him on charges that he tried to extort the talk-show host. Keifer Bonvillain, who had the charges dismissed, seeks damages of $180 million from Winfrey, her attorney and the FBI in the federal lawsuit filed Tuesday. Bonvillain, of Houma, La., was arrested in December 2006 after he allegedly recorded telephone conversations with an employee of Winfrey's production company and told a company associate he wanted to publish a book based on the recordings. The FBI said he claimed to have offers from publishers and tabloids ranging from $500,000 to $3 million. The FBI arrested Bonvillain when another company associate agreed to pay him $1.5 million, wired him $3,000 and arranged to meet him. Bonvillain claims in the lawsuit that he did everything he could to avoid doing anything illegal. "There was substantial damage done to my name and reputation on a world level," he wrote. "The extent of my damages is vast." Federal officials agreed to dismiss the charges last year on the condition that Bonvillain perform 50 hours of community service, undergo drug testing and pay $3,000 in restitution. Chip Babcock, a lawyer for Winfrey's Harpo Productions, denied the allegations in Bonvillain's suit. "And we know that this whole episode started when the plaintiff wiretapped a Harpo employee in California," he said. "We advised (Bonvillain) that we believe that wiretapping was illegal, and this case will give us an opportunity to determine whether we were right about that."