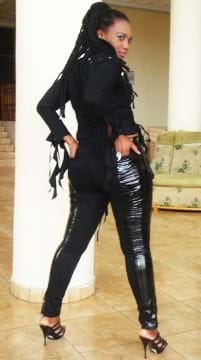 She may be 40 with a 21 year old son but screen goddess Pascaline Edwards still has an eye for sexy muscular men. “When a man is fit, you don’t have cause for alarm. If you have to go out, when he dresses, he looks good. If you have to come to bed, he’s on top so both ways, you don’t lose and you get to grow old together”, the diva who has lost count of the number of movies she has starred in declared on Citi FM’s mid-morning show Brunch in the Citi on Wednesday November 24, 2010. Pascaline Edwards, who looks much younger than her advertised 40 years, said she was constantly amazed by her youthful looks. “Sometimes I look at myself and I wonder if my parents got my date and year right.” And she’s got a lot of young men hitting on her. Regular witty hostess of the program, Jessica Opare-Saforo had a very hearty conversation with the Diva whilst allowing her to make some really cool song selections. Among her favourite artistes are Fela Kuti, Nigeria’s ‘Asa’ and the ‘Bee Gees’. Her secret for keeping fit and looking youthful? Exercise. “I exercise every day. If I go on location, I take my CDs with me. If I don’t exercise within a week, you will see me and you can tell I am sick. I have body pains and I feel terrible.” Perhaps not surprisingly, she is currently married to the head judge of the Body Builders Association. She has a Fitness Centre and intends to open more branches. The multi-talented actress has a 21 year old son, Samuel, who was into acting as well but is currently an Aeronautic engineering student. The actress, who has Swiss, Scottish, Portuguese and Ghanaian blood is also a cousin on her mother’s side to equally talented actor Majid Michel. Sporting her neat natural locks – she has had them for three years - Pascaline revealed her fond desire to be known as Ghana’s Demi Moore after her favourite American actress and role model Demi Moore. Pascaline has been acting for 21 years and has lost count of the number of movies she has starred in, but the impact on her life has been “unquantifiable.” “Acting has taught me a lot about life. It has changed my perception on life and how to deal with people…I used to be a very shy, reserved person who quickly got angry at anything but with acting, I have developed this patience and I don’t know where it came from. I tolerate people more, I tend to understand people more. I cherish the fact that it has taught me a lot about life,” she said. On her usual casting in “bad girl” roles, she said, “I think I look so sweet and innocent so they want to spoil me a bit and I do them so well.” Watch out for the new movie from Ghana’s Best Actress for 2001, “For love and for war”, as well as another one still in the pipeline.