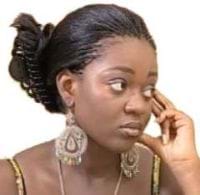 When one decides to take a close look at the Ghanaian film industry, one name that is synonymous and would ring the loudest bell is Jackie Appiah. This lady has been one of the few African queens on our screens who have braced through the odds to take African movie to the next level. Jackie Appiah is one the youngest celebrated female actresses on the west coast of Africa. At a glance, this soft African queen of the screen strikes a deep smile and it swells from the tips of toes and explodes from her lips. Her memory of when she started acting goes back to 2001 immediately after she participated in a talent hunt competition of which she came second. She recall immediately after the contest a guy name by the name of Edward Sedor came over to her and told her about a new T.V series dubbed “Things We Do For Love”. Edward Sedor then introduced her to Ivan Quashiegah who had also seen the potentials she possessed. She faintly remembers Derek Sewornu who helped her prepare for the shooting of “Things We Do For Love”. She was affectionately called Enyonam on that series. She admits that, it was challenging to act at first in front of the cameras. Her reason being that; “it is quite unique especially standing in front of the cameras and having a director telling you what to do and with all the lightening on you. It was quite nice because the only thing I remember enjoying doing around that time was acting in the church and at school but never thought I will soon be in front of the cameras”. Asked about Mr. Blagoji who was the father in that famous T.V series and how she felt about him, with a smile she said, that man, referring to Mr. Blagoji, he is a very nice and humble person but acting portrays you in another way. That was my no nonsense father in THINGS WE DO FOR LOVE. She recalls how, she first saw herself on T.V; “mine, it was nice and I remember all the calls I was receiving from my friends and the phone would not stop ringing. People were around me and it felt nice to be a star”. This ebullient actress looks back and she smiles at how fast she has grown into a well known actress acting with all her favorite film stars she only saw on T.V. She is proud to act with some of the biggest movie stars in Africa. “This has given me a chance to step up to the plate. For me that is monumental feat for a protégé like me”. Her first movie was DIVINE LOVE and that was the beginning of her rise to stardom and to fame. She is quick to add that fame brought her two things. First, her movement became more and more restricted. “I soon realized how difficult it became for me to do all the ordinary things I loved to do”. The other is that it became more difficult for her to even yell at people in traffic for being careless whiles driving lest someone may say, oh this girl is rude and does not respect, after all who does she think she is. About what keeps her going and acting well especially wining yet again the best female actress in the just ended ACRAG award, beating Nadia Buari and Grace Nortey for 2008? Last year, she won the best female actress in supporting role and she was in the same category with some of the biggest movie stars in Arica including Genevieve Nnaji and Stella Damascus beating them to take that award during the AFRICAN MOVIE ACADEMY AWARDS (AMAA). “It is no surprise to me when I won these awards earlier this month. My secret is hard work and makes sure I listen to advice and I never forget those who helped to make me who I am today. I always remember and appreciate them. Humility and being humble has brought some of the directors and scriptwriters my way”. Responding to questions about motherhood and how she finds time to blend her busy schedules; she said; “my husband and my friends support me especially with my incessant travel to locations to shoot new movies”. She tells Weekly Fylla that it is not easy to combine the two; my husband and son sometimes come along with me to location. She would not talk too much about her young family but says her son is too hyperactive especially when she is a very reserved person by nature. She says my husband gives me all I want and my acting also brings in some good money, at least I am able to pay my bills and keep a good car. Her advice to the youth is that she has gotten to this level because she has not been sniffing, smoking or injecting anything to make her act well and they must listen to professional advice. She plans on going back to school while still doing good movies. She revealed to Weekly Fylla that her fans should watch out for her latest film entitled (PRETTY QUEEN) which would be premiered at the National Theater on the 26th of month. In this film she wants her fans to know that, they will see a different Jackie Appiah who does play a hard person in sharp contrast to soft roles in her previous movies. “They must be prepared for a shocker, this time I am not crying”. She would not say anything about her marriage and the rumors making rounds that she is divorced. She thinks the public can speculate but as far she is concerned, she is doing fine in her family life and role as a wife. She quotes Henry James; “after a mans long work is over and the sound of his voice is still, those in whose regard he has held a high place find his image strangely simplified and summarized”.