I'll Have Two More By Next Year Brad Pitt 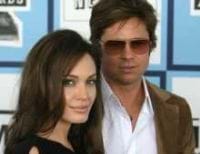 Brad Pitt wants to have "two more" children with Angelina Jolie by next year. The actor - who recently welcomed twins Knox Leon and Vivienne Marcheline with Angelina into the world - admits he has no intention of stopping at six kids. When asked how his twins were, Brad replied: "The twins are fine" before adding, "I'll have two more by next year." Brad, who is in Venice, Italy, to promote his new movie Burn After Reading, also revealed he has been sharing his children with friend and castmate George Clooney. When George was asked if he is planning to marry and have children, he replied sarcastically: "I am so surprised to hear that question. This honestly is the first time I've ever been asked that question. I'm getting married and having children today." Brad added: "Until then, I'll be sharing mine with him."