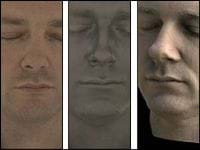 Hollywood is on the verge of breaking into an entirely new virtual world. Scientists have developed systems to make digital doubles of actors which are so realistic that audiences will never notice the difference. Computer-generated visual effects have long since been used by film-makers to create space ships and monsters. But the latest technology allows them to create models of real people that can be seamlessly morphed into action scenes featuring human actors. "We're just at the cusp of being able to create the actors, the heroes and the stars of the film, using computer graphics as well," says Dr Paul E Debevec, a graphics researcher at the University of Southern California. 'Compelling and convincing' The process of creating a digital double starts with the actor subject, posing for an extremely high-tech photograph. The Aguru Dome, a futuristic-looking photo booth, has been developed to scan a person's face in extraordinary detail. "It's the world's highest resolution face capture system," says Paul Carroll, an engineer with Aguru Images. "It captures not only the shape of your face but the way light interacts with your face from every angle." The actor's head locked in place, lights flashing from 546 directions and 93 computers operating, the device produces one of the most accurate images of any camera system in the world. The data is then used on a computer to manipulate the image. Once animated, film-makers can create action sequences featuring the actor, which never actually happened. "They are completely compelling and convincing," says Mr Carroll. For now, the technology is not designed to replace human performers entirely. It will be used when film-makers need to re-shoot scenes when the actor is no longer available. The star of the movie may have moved on to another project or changed their physical appearance for a new role. The scientists also believe they have developed a way to mimic that special human faculty to express emotion. "We have the ability right now to bring the emotions off of a performance that somebody just does on video," says Dr Debevec. "If necessary a very good animator can actually move the mouth and eyes around to give a great performance as well. "They are effectively the puppeteer of one of these photo reel digital actors." The Aguru Dome has just gone on the market and will be delivered to the first customers next month. Some Hollywood studios have already tried out the technology although no movies have yet been released featuring the device's digital doubles. "This combination of technologies is just at the brink where in the next couple of years we'll see it really work and we're all going to be pretty amazed by it," says Dr Debevec. Film-makers are also using motion capture technology to make a relatively cheap rough cut of a movie. Digital versions of unknown actors are created so they can shoot a full-length 'pilot'. "You go through the entire script with digital props and car crashes with digital robots, says Tracy McSheery, an engineer with PhaseSpace, a company that specialises in motion capture systems. "You can show it to test audiences and vet the entire production to make sure that it's exactly what you want before you spend the million of dollars and months of time and then find out it didn't quite have the look or feel that you were hoping for." But will the technology ever become so sophisticated that it puts Hollywood stars out of a job? "There's totally the possibility that you can create something that never existed, that becomes a popular star of motion picture," says Dr Debevec. "This has been done with Mickey Mouse, to begin with, and Bugs Bunny and all of these animated characters. The only change now is that they'll be able to look like real people instead of cartoon characters." But cynics argue that digital characters could never replicate the on-screen nuances of a skilled method actor. "The best, most powerful and most easily-programmed computer in the world is the one between our ears," agrees Mr Carroll. "For a while yet, the cheapest way to make movies will be for real people to follow the directions of the director. Sure, CGI effects are cool and will advance a lot as the years pass, but actors will be with us a long while yet."