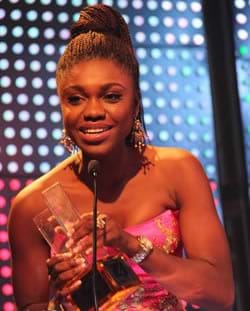 Rebecca Akyeampong known in showbiz as Becca swept the Overall Music Video Award at the second Vodafone 4syte Music Video Awards 2011. The second edition of the 4syte Music Video Awards (MVA)’s which took place over the weekend would have been one of the best shows on the 2011 entertainment calendar but for a few critical lapses that were ignore by the organisers. Undoubtedly the Music Awards which is sponsored by telecom giant Vodafone is a crowd puller and it is this bit that the organisers should learn to pay attention to because with this number of people coming to a show of this magnitude, they should not be taken for granted. Before I go into the nitty-gritty of the show let me first acknowledge the concept of wanting to recognise and honour our hard working artistes who apart from giving us lovely tunes to listen and dance to, go to great lengths to produce music videos to complement the songs. Also I believe everyone who came to watch the show would agree with me that the content of the program was great but it fell short of perfect execution. Big ups to all the awardees, Ghana is grateful and proud of you and we wish you all the best in the coming years. For those of you who could not pick up any award, better luck next time and hope we would be celebrating you come the next awards. Away from all that, are the organisers saying they did not know the sitting capacity of the Accra International Conference Centre for which tickets were sold over and above the number of seats in the Conference Centre? I am asking this because both the ground floor and the first floor of the Conference Centre were so packed one could hardly find a place to step. It was war if you tried to go out from the auditorium and vice versa. I could count about six people holding VIP tickets who had to go to the first floor because there was no space to even stand on the ground floor and talking about standing, most people had to virtually stand throughout the show which did not even start on time. The frustration on the faces of the audience said it all. Would it not have been better if the show was taken to the Dome of the Conference Centre which would have been a better option of the two thus Conference Centre and Dome? At least you could sit a lot more people in there than in the auditorium. Some amount of security was provided but it could not cater for the numbers because of the obvious, leaving innocent people to be attacked and robbed. Yes two ladies had their purses taken away from their seats when a scuffle broke out in the isle on the right side of the auditorium when you are heading to the main stage. One of the security guys came back after the fight with blood stains in his shirt and no one could not tell whether it was his blood or the blood of whomever. This is simply unacceptable, not for a show like the Music Video Awards. Not at all. As for the carpet used for the stage, the least said about it the better because some artiste nearly fell. The internal deco in its entirety should be worked on because it really did not look good and I think with the standard we want to achieve especially on the global entertainment stage, the earlier we improve, the better for us all. Anyway here are the winners of this year’s Vodafone 4syte TV Music Video Awards. Becca swept two awards - the overall best music video with her song ‘African Woman’ and best female video award. Ghana’s fastest rapper Sarkodie also swept two awards, Best Hip-hop Video with the song ‘Lay Away ft. Sway and Best Editing. Sarkodie also shared the Best Collaboration Award with R2Bees with the song ‘Agyeii’. Budding artiste Bra Kevin Beats also took home two awards, Discovery of the Year, and Best Directed Video with the song titled ‘3 Headed Beast’ Best Video for the Male Category went to Okyeame Kwame with the song ‘Faithful’ ft. Bertha. Best Hiplife Video went Asem with the song ‘No more Kpayor’ Best Storyline Video was taken by Eassy with her song ‘One Love’ Best Choreography Video went to Richie Best Special Effect Video was taken by Obour Best Highlife Video went to legendary George Darko of ‘Ako Te Brofo fame’ Best Reggae Video was taken by Samini Best Gospel Video went to Cwesi Oteng Best Photography Video went to Man Sing Angel Best Group Video went to 4x4 Best African Video went to D-Banj There were some honourary awardees for the event and they included The Living Legend Award which was picked up by Ernest Addoquaye Achievement Award was picked up by Ivan Quashiga