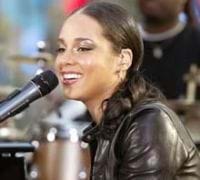 Alicia Keys has apologised to fans in Indonesia after discovering one of her forthcoming concerts was sponsored by tobacco firm Philip Morris. Billboard posters for the Jakarta gig, which takes place on 31 July, featured a logo for the A Mild cigarette brand. In a statement, Keys said she asked for "corrective actions" as soon as she learned of the advertisements. As a result, she added, the company had withdrawn their sponsorship and all signage had been removed. The Grammy-award winning singer had been criticised by anti-smoking campaigners, who claimed the deal would encourage young fans to take up smoking. Campaigning organisation Tobacco Free Kids said the branding was "inconsistent with (Keys') advocacy for children's health through her involvement in Keep A Child Alive, a campaign to address the HIV/AIDS epidemic in poor countries". It sent an open letter to the R&B star, signed by several anti-tobacco agencies, calling on her to "put the health of Indonesia's children first" and remove the advertising or cancel her concert. In her statement, Keys said: "I apologize for any misleading advertising initially associated with the show. "I'm an unyielding advocate for the well-being and health of children around the world and do not condone or endorse smoking. "I look forward to bringing my music and message to my wonderful fans in Jakarta."