A Good Story Not Enough For a Great movie–Ken Attoh 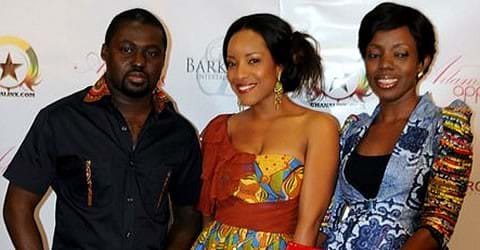 Movie producer and creative director at Sparrow Productions, Ken Attoh has advised that as much as we may have a good story line to a movie, failure to enhance it technically will leave the final product a failed project. According to him the technical aspect of movie production, which involves lighting, sound, camera and graphics, plays a crucial role in the total outcome of the movie and if not taken seriously, a finished movie may just not be up to expectation. “if you sit in a cinema or you sit at home and you are watching a movie - a good story – and you can’t hear the sound properly and the images are not as clean and clear, they are not cinematic, you would actually lose interest ... if the story is really good and all these other aspects are not good enough, you could actually stop the movie half-way,” Ken explained. Ken, who was speaking in an interview with Myjoyonline.com Tuesday after an executive preview of Chapter 5 of the ten-chapter Adams Apples series at the Silverbird cinema said it is rather unfortunate that we don’t put a lot into the technical aspect of movie productions thus the low quality of movies being produced. The situation, according to him, is however changing because, “Other production houses are beginning to recognise that they need to pay a little bit more attention to the technical side of the art that they do. We are beginning to see that even the art work for their packaging is beginning to change.” He further explained some producers are now, “beginning to ask questions about types of cameras that are being used; they are beginning to hire the right kind of technical people to man these equipments to bring their stories to life... it is beginning to change.” For producers to produce good quality movies and get there internationally, Ken advised that they should invest in the right equipment and also employ the right expertise for their productions. The Akan movie sector, responsible for producing a huge chunk of the movies, has come under the radar for producing sub-standard movies unsuitable for the international market. He called on them to try to get a good picture done adding though “it may not be the time for them to invest so much in all sorts of gadgets to be able to put their movie out there.” With the right marketing structures in place to distribute and sell movies to a wider audience, Ken noted, it will be worthwhile “to get the right kind of equipment and produce high-end productions for our market and outside.” So what do you think of the Adamses?’ This simple question Albert asks his daughter unfolds just a fraction of the wahala that continues in Chapter 5. Jennifer (Joselyn Dumas) may seem softer from catching the love bug, but she’s far from embracing her niece, nemesis and barrier to Gerald. So what happens when the three meet in the hospital corridors? Kukua (Naa Ashorkor Mensah Doku) struggles to maintain her standing at work, especially when Denu (John Dumelo) fronts his new girlfriend for an ad campaign. Her decision to seek solace with Chidi reveals a rather shattering surprise. And Mrs. Adams (Anima Misa Amoah) problems seem far from over when Michele and her son get cosier. Mr. & Mrs. Smith do not live happily ever after- yet. Chris has to deal first with the devious Kim, who is determined to have his baby at all cost. Meanwhile, Baaba (Yvonne Okoro) will kill to keep her past from interfering with her present. The Adams girls prove that the apple indeed, doesn’t fall far from the tree. Chapter 5 of the ten-chapter series starts showing at the Silverbird Cinema Friday, October 14.