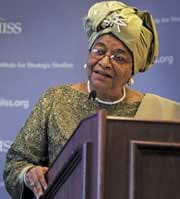 President Sirleaf's Intervention Propels 13th AU Marathon Sessions Website
Discussions at the 13th Ordinary Session of Heads of State and Government, ran well into the early hours of Friday morning, as Leaders deliberated in marathon sessions to reach consensus on crucial issues which earlier threatened to stall the sessions. The issue centered on procedural matters affecting the agenda as well as the question of sovereignty as the leaders discussed an African Union Government. In her intervention, the Liberian leader noted that the setting up of a single administrative structure to implement policy issues was intended to create the platform that would allow Africa confront international issues and challenges with a unified position. The President clarified that the initiative was not intended to cede sovereignty to an African Union Authority, which is being proposed. "The Authority, in my view will help collaborate with African Governments to derive a common approach on issues affecting the continent," the Chair of the Mano River Union clarified. The intervention by the Liberian President provided an opportunity for leaders earlier opposed to the idea, to reconsider the principle, following the resumption of a late night session, which ran well into the early Friday morning hours. The session was convened in response to a request by Liberian President Ellen Johnson Sirleaf calling for a suspension of Thursday afternoon deliberations, to allow the Technical Committee of Foreign Ministers of the Union craft the technical details to facility further discussions on the thorny issues. As the Summit entered its third day, Heads of State and Government convened Friday afternoon to consider, among other issues, the introduction of an African Union Authority to replace the African Union. The Authority, if approved, will provide for a President, a Vice President and Secretaries, who will, among other areas, coordinate a common defense, foreign, trade and investment and agricultural polices within Africa, in collaboration with African Governments. The Liberian leader has, meanwhile, urged African leaders and Heads of State and Government to work cooperatively to ensure that all countries work toward the achievement of the goals of an integrated Africa. The President said the principle of a United African Government was too important to the growth and development of the continent to be left to a few countries. The Liberian leader's admonition followed suggestions by other African leaders supporting the creation of an United African Government to proceed while the other African countries remain undecided.